1
Krysten Alyce Ritter is an American actress, musician, writer, and former model. She is known for her roles as Jane Margolis on the AMC drama series Breaking Bad, and Chloe on the ABC comedy series Don't Trust the B---- in Apartment 23 from 2010 to 2012.

For Disney, she played the titular character in the Marvel Television series, Jessica Jones, which premiered on Netflix in 2015, and reprised her role in The Defenders. She also played Suze Cleath-Stuart in the 2009 Touchstone Pictures film, Confessions of a Shopaholic.

Krysten Ritter speaks during the 'Don't Trust the B---- In Apartment 23' panel at the ABC portion of the 2012 Winter TCA Tour. 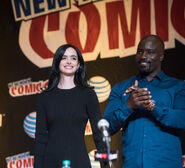 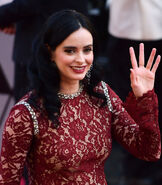 Krysten Ritter arrives at the 91st annual Academy Awards in February 2019.
Add a photo to this gallery
Retrieved from "https://disney.fandom.com/wiki/Krysten_Ritter?oldid=3950335"
Community content is available under CC-BY-SA unless otherwise noted.