Mickey's determination to write an illusive song leads him on a mystical journey through the Hawaiian Islands. 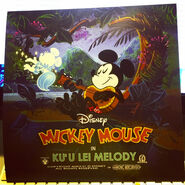