Kuiil is a supporting character of the Disney+ original series The Mandalorian. He is an Ugnaught male vapor farmer who led Din Djarin to Grogu.

Kuiil worked for the Galactic Empire as an indentured servant, utilized for his craftsmanship and mechanics skills. After earning his freedom by serving for many years, Kuiil ventured off to the distant and remote desert planet of Arvala-7 to work in solitude as a moisture farmer.[1]

Kuiil stumbled upon the Mandalorian Din Djarin being attacked by two blurrgs and decided to rescue him and take him back to his moisture farm. There, a discussion of Djarin's job took place, with Kuiil confiding to Djarin that many bounty hunters had come searching for Grogu as he had, disturbing the peace on the solitary planet. As Djarin struggled, Kuiil motivated the bounty hunter by telling him of his ancestors that had rode the great mythosaur. Afterwards, the two ventured out to the encampment. Kuiil left Djarin and wished him luck, heading back to the farm.[2]

Some time later, Djarin returned to Kuiil's farm after successfully retrieving his bounty and explained that his ship, the Razor Crest, had been damaged and looted by local Jawas. Kuiil was surprised to see Din Djarin alive and that Grogu was what all the bounty hunter trouble had been about. Kuiil agreed to assist Djarin in recovering the stolen parts of his ship and suggested that Djarin try trading with the Jawas instead of fighting them.[3] 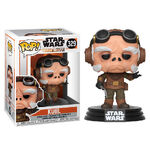