For Disney, she played Michelle Porter in the movie College Road Trip, Wanda in the ABC sitcom My Wife and Kids and she currently stars in the Freeform sitcom Young & Hungry. She also guest starred on ABC's Grey's Anatomy, on Disney Channel's That's So Raven and Jonas L.A. and on Freeform's Baby Daddy. She also voiced Caramel Jones on Disney Channel's The Proud Family and was a guest on FYI's Kocktails with Khloé. 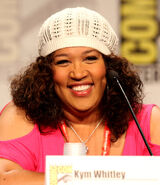 Retrieved from "https://disney.fandom.com/wiki/Kym_Whitley?oldid=3056337"
Community content is available under CC-BY-SA unless otherwise noted.