Kim Possible Movie: So the Drama

Kyoko Yoshiko is Nakasumi's translator. She is always by his side, and knows a lot about his operations. Kim first met Yoshiko when Dr. Drakken stole a video game factory from Nakasumi in order to build a giant robot. Yoshiko and Nakasumi helped Kim the second time by providing transportation to England for a mission to find Ron. Kim met Yoshiko the third time to foil Nakasumi's kidnapping. It was at this meeting that it was revealed that Nakasumi could speak English very fluently; but liked to whisper to Kyoko, she say's it's because he is a bit "wacky." 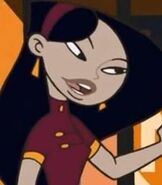