Co-pilot of the Millennium Falcon

L3-37 is one of the secondary protagonists in the Star Wars anthology film, Solo. She is a feminine hodgepodge droid once associated with Lando Calrissian.

During the reign of the Galactic Empire, L3-37 served as Lando's first mate aboard the Millennium Falcon. She was a one of a kind droid, who assembled and improved herself with scraped parts of other droids. She even pieced together her own torso from an old astromech. Her role as the navigator made her a valuable assist aboard Lando's ship. She had the best navigational database in the galaxy (which was later fitted into the Falcon's navigation computer following her destruction).

L3-37 was known to have quite a feminine personality, and cared deeply about droid rights. Whenever she saw a droid being mistreated, she would not hesitate to make a stand for her kind. L3-37's habit of speaking her mind and her relentless advocacy for mechanicals can alienate organic beings.

L3 first meets Han Solo and Chewbacca when they come to higher Lando Calrissian for a heist of unprocessed coaxium from the mines on Kessel, following a previous failed heist on the planet Vandor. While meeting with Lando, L3 was protesting against a caged droid fight. She almost gets into a hassle with the one hosting the fight until Lando steps in. L3 returns to the Millennium Falcon with with Lando and their clients, and took off to the planet Kessel.

After infiltrating the mines, L3 starts off a riot after removing the droids' restriction devices, encouraging the droids to set themselves free. The riot gives them the distraction they needed to steal the a consignment of unprocessed, volatile coaxium. During the riot however, L3 gets shot multiple times. Lando tries to save her, but she short circuited in his arms soon after getting her back on the ship. Her death was not in vain however, as her databanks still contained star map information that proved vital to the party's escape from the maelstrom. Lando uploads her programming into the ship as a navigation system and helps the group leave the Kessel sector. 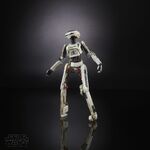 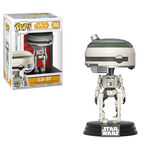