The LEGO Group is a privately-owned Danish multinational company that manufactures and licenses LEGO brand toys, video games, and theme parks. Though technically a competitor in the theme park industry, LEGO has produced toy lines based on Disney intellectual properties since 1999 and has operated retail stores at Disney theme park resorts since 1997. Its manufacturer company, The Lego Group, is based in Billund, Denmark.

Lego toy lines based on Disney intellectual properties include Mickey Mouse, Toy Story, Cars, Pirates of the Caribbean, Marvel Super Heroes, Disney Princess, and perhaps most famously, Star Wars. Lego has produced Star Wars toys since 1999, thirteen years before Disney's acquisition of the franchise. Due to this, Star Wars Miniland attractions appear in several Legoland theme parks. The only other instance of Disney-owned intellectual property existing in a competitor's park is Marvel Super Hero Island at Universal's Islands of Adventure. There is a blind bag series packaged with iconic characters from various Disney franchises in LEGO form. 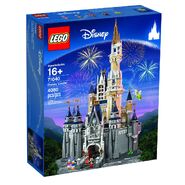