Lady Montague from Romeo and Juliet

Leader of the Blue Gnomes

Lord Redbrick (formerly), Tybalt (formerly), Fawn (formerly), Other Red Gnomes (formerly), Moriarty
Lady Bluebury is the widowed mother of Gnomeo, the leader of the Blue Gnomes and is a supporting character in the 2011 animated film, Gnomeo & Juliet. She is voiced by Maggie Smith.

Lady Bluebury is the leader of the Blue Gnomes who live in Mrs. Montague's garden and battles Lord Redbrick and the Red Gnomes who live in Mr. Capulet's garden. She was first seen making fun of Lord Redbrick about his tulips and his misuse of fancy words. She later met up with her son, Gnomeo, to wish him luck for the lawn mower race. She later gave a nod of approval when Gnomeo decide to take action against the red gnomes when Tybalt won the race by cheating.

She was later seen crying because the red gnomes destroyed their most prized plant, which her husband had planted and grown himself. She asked Gnomeo where he was and Gnomeo told her that he was nowhere when in reality, he was on a date with Juliet, a red gnome. She later heard a noise of breaking glass and went with the others to investigate. She learned that Gnomeo had fought with Tybalt and Tybalt ended up hitting the wall, smashing him to bits. She watched in horror as Gnomeo get chased by the red gnomes and apparently got smashed by a car. She mourns for Gnomeo's death, not knowing that Gnomeo was still alive. She later saw Benny with the Terrafirminator and approve with his plan of revenge to the red gnomes. The destruction caused the Terrafirminator later resulted to war between the blue gnomes and red gnomes. She soon saw Gnomeo, alive and well, and was relieved. However, her joy was short-lived with the out-of-control Terrafirminator crashes into Juliet's pedestal. She apologizes to Lord Redbrick and makes up him, ending the feud. When Lord Redbrick accidentally stepped on the switch to the pedestal, which knocks down the rumbles, she saw that Gnomeo and Juliet were still alive. She later witness her son's marriage to Juliet and dances with Lord Redbrick. 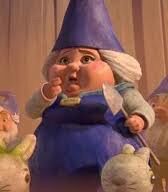 Lady Bluebury with her son Gnomeo

Lady Bluebury with Lord Redbrick
Add a photo to this gallery

Retrieved from "https://disney.fandom.com/wiki/Lady_Bluebury?oldid=3907199"
Community content is available under CC-BY-SA unless otherwise noted.