The loss of her father, King Frederic, Rapunzel

Axel (horse)
Lady Caine is the main antagonist of Tangled: Before Ever After and a recurring antagonist in the show, Tangled: The Series. She is the leader of a pirate gang.

When Caine was a child, the princess and heir to the throne of Corona was kidnapped and the King ordered the guards to arrest all the criminals in the kingdom, as he believed that one of them had something to do with his daughter's kidnapping. One of the criminals was a petty thief, Caine's father. Caine was enraged with her father's arrest as he had nothing to do with the Lost Princess' kidnapping and spent the rest of his life in prison until he passed away.

Over the years, Caine became "Lady Caine", the leader of a pirate gang and well known in the thieving and crime community - as Eugene knew who she was and has many criminals willing to serve her.

Lady Caine bided her time until the opportunity to exact her revenge presented itself in the form of Rapunzel's coronation, in which she infiltrated by disguising herself as the "Duchess of Quintonia". On the day of the coronation, Caine made her way to the castle's dungeon so she could free her crew of criminals. When they made themselves known, the crew captured a hand full of nobles and Lady Caine told Rapunzel what her father did to her before she ordered her men to take the King away as Lady Caine wanted King Frederic and the other captured nobles to know what it is like to be locked up and taken away from their families.

Rapunzel, however, wasn't going to let Caine or her crew take her father away, so after she used her long hair to free the captives. Rapunzel, with the help of Eugene and Cassandra battled with the gang of criminals. Lady Caine fought against Cassandra. With her crew defeated and running out of options, Lady Caine grabbed the only weapon that she could get her hands on, which was used to lock the door and keep the guards out; when Caine realized her mistake it was already too late. She and the rest of her crew were arrested for their past and recent crimes and were brought back to the dungeon to serve their sentence.

In "Max's Enemy", Caine is shown to still be in prison, though her connections in the criminal underworld would act as her means of escaping unnoticed; she enlisted the thief, Dwayne, and her horse, Axel, to infiltrate the castle and break her out. The two succeeded in the mission almost without notice, but Maximus eventually caught onto the scheme, as did Rapunzel. Together, the two were able to apprehend Caine and Dwayne, as well as Axel.

In "Max and Eugene in Peril on the High Seas", she and many other bad guys previously encountered by the heroes took over the prison barge they were on. However their plan was foiled again and they were locked up again.

In "Rapunzeltopia", when Rapunzel is trapped in a dream world where she never touched the black rocks, Lady Caine and her criminal associates were captured before they could disrupt her coronation.

In "Plus Est En Vous", she is surprisingly seen amongst Rapunzel's loved ones and the people of Corona as they sing about living happily ever after.

Her signature attire is grey and brown corset with a dark brown sleeveless, underbust vest over it, a necklace with a skeleton pendant, brown gloves, greyish-brown capris-style trousers with ruffles at the end, a black belt, dull grey stockings, and black boots. Her right shoulder has a rose and skeleton tattoo, and her hair is in a bun with curled side bangs.

For disguise, Lady Caine has her real hair under a white powdered wig styled in a "handmade coiffure weft from the finest silk and Vicuna fabrics." Her face is covered in white make-up with red blushes along with the same eyeshadow. She wears a pale pink floor-length dress with white trimming at the collar and ribbons. 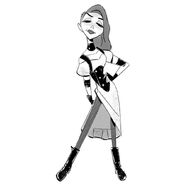 Caine realizing her "mistake", in which led to her defeat