Clayton † (brother)
Lady Waltham is the reformed minor villain in The Legend of Tarzan. She was Clayton's younger sister. She only appeared once in the episode "Tarzan and the Gauntlet of Vengeance".

Lady Waltham hails from England where she was born and raised alongside her brother, Clayton. Considering she bears the title of Lady, it can be assumed Waltham is of noble lineage and born to a family of high society.

When they grew up, Clayton departed to Africa to act as a guide and protector to Archimedes Q. Porter and his daughter, Jane.

Sometime later, Waltham had learned her brother died, apparently, by the hands of a "savage man", named Tarzan. She became obsessed with revenge and filled with hatred, as she procured information on Tarzan from a sailor before departing to Africa with her valet.

There, she asked for a guide through the jungle for a photographic safari, requesting Tarzan whom she'd heard "came highly recommended". Tarzan appeared and saved her, her valet, and several workmen from a loading accident. Tarzan agreed to be her guide and took her on a tour through the jungle. During the tour, Waltham and Tarzan debated over the expression "an eye for an eye", Waltham assuming animals lived by the harsh law of "Survival of the Fittest", and revenge, the latter which Tarzan disagreed, saying animals did not understand revenge, only that humans did. Checking her pocket watch, Waltham suggested they go see Jane for teatime.

At Tarzan's tree house, they found signs of a struggle, and Waltham revealed her motives: She'd come to Africa to exact her revenge on Tarzan by having her valet kidnap Tarzan's friends and family, and revealed to him that Clayton was her brother and was convinced Tarzan had killed him.

Tarzan tried to explain that Clayton's death was an accident but Waltham refused to listen as she explained Prof. Porter, Jane, Terk, and Tantor were all in mortal peril and would die without Tarzan's help. Before Tarzan could leave to do so, Waltham struck him with a poisoned dart via a blowgun and told him she'd placed the antidote atop a nearby mountain she'd christened Clayton's Peak before stating Tarzan would suffer as she did (losing loved ones) or would suffer as Clayton did (losing his life).

Waltham and her valet observed how Tarzan was able to save Terk, Tantor, and Prof. Porter, fascinated how he persisted despite the poison weakening him and causing him pain.

Finally, Tarzan found Jane caged in a seaside cave, flooding up as the tide came in. Waltham appeared before Tarzan that he could abandon Jane and go for the antidote atop Clayton's Peak, but he refused and saved his wife. Seeing him head for the mountain, Waltham smirked as she had the antidote with her, it was never on the mountain. Taking her leave, she was cornered by Nuru and Sheeta and would've been killed, had Tarzan not intervened. Despite being on the verge of death, Tarzan drove away the panthers away, saving Waltham. Shocked by this, Waltham saw he was not a monster and gave him the antidote as he began to fall unconscious.

Back in the tree house, when Tarzan awoke, Waltham apologized, finally realizing Tarzan, having been willing to sacrifice his life to save hers, couldn't have killed Clayton, to which she'd been blinded by her own hatred. She was overcome with remorse and shame, unable to find the right words to express how sorry she was, but Tarzan forgave her, assuring her those words were enough. 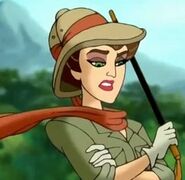