This article is about the 2019 live-action film. For the 1955 film of the same name, see Lady and the Tramp.

English
Lady and the Tramp is an American made-for-streaming live-action/CGI-animated musical romance film distributed by Disney which was released on November 12, 2019. As a remake of the 1955 Walt Disney Productions feature film of the same name, the film is directed by Charlie Bean from a screenplay by Andrew Bujalski and Kari Granlund, based on the short story Happy Dan, the Cynical Dog by Ward Greene. Walt Disney Studios Motion Pictures confirmed that the film would be released on their new streaming service instead of playing in theaters.[1]

On Christmas of 1909, Jim Dear gives his wife, Darling, a female American Cocker Spaniel puppy as a present. She takes to her and names her Lady where she essentially becomes the "centre of their world". Lady grows and becomes friends with her neighbour dogs; a Bloodhound named Trusty and a feisty Scottish Terrier named Jock. Meanwhile, a homeless Schnauzer-mutt, who goes by the name Tramp, spends his days wandering the streets of New Orleans in search of food and causing trouble for the dog catcher Elliot who owns a vendetta against him. After freeing his friends Bull and Peg from Elliot's carriage, he makes a run for it and ends up in the Dears' backyard. Lady, who is beside herself after being ignored by the adults, finds Tramp and tries to give away his position until he points out that Darling is clearly having a baby. He warns her that her owners will keep ignoring her and the baby will replace her, but she refuses to believe him. Trusty and Jock suspect Tramp because he's a "street dog" and send him away. Before gladly leaving, Tramp warns them that "when a baby moves in the dog moves out". Jim and Darling have a baby girl named Lulu who they soon devote their lives to ("La La Lu"). They even stop listening to Lady's warnings of a rat that has been plaguing the house and start putting her outside. Lady begins to worry Tramp was right.

One day, Jim and Darling take Lulu out and leave Darling's Aunt Sarah to look after Lady for them, though she had really hoped to look after Lulu. As she goes upstairs to practice her singing, her two trouble-making cats, which are two Devon Rexes named Devon and Rex begin to destroy the house with Lady caught in the middle ("What a Shame"). Believing Lady to be the cause of it all, Aunt Sarah takes Lady to the pet store to have a muzzle placed on her. Lady runs away, but gets trapped in an alley and threatened by a brutal street dog named Isaac. Luckily, Tramp arrives to save her and then helps her remove her muzzle with a statue at the park before opting to take her home by taking the "scenic route" so as to avoid Elliot since Lady left her collar behind. They end up growing close and Lady accepts Tramp's offer to eat at "Tony's", his favorite restaurant ("Bella Notte"). Afterwards, Tramp shows Lady the view of the town and reveals that he too had owners, but they abandoned him once they had a baby. They get found by Elliot and are chased to the train station where Tramp sleeps. Though Tramp tells Lady to run, she returns to help him and gets caught instead. Tramp hesitates before escaping. Lady meets with Peg, Bull and the other pound dogs who all talk about Tramp and his exploits ("He's a Tramp"). The next morning, Jim and Darling pick up Lady and kick Aunt Sarah and her cats out, presumably forever, for the way she mistreated Lady. Lady begins to bond with Lulu.

Sometime later, Tramp who has become depressed after not seeing Lady for a long time, finds that Peg and Bull have both been adopted, causing him to further regret leaving Lady behind. Following Peg's advice, the dog takes the bone from Bull and runs to Lady, hoping that she will give him a second chance. He finally came to her house to apologize and while she appreciates it and still loves him, she doesn't want to leave her family again.

Tramp sadly accepts her decision and walks away heartbroken when a storm breaks out. However, the rat returns and sneaks into Lulu's room. Lady is put away just as Elliot arrives to interview Jim and Darling and tell them about Tramp. She manages to call Tramp who sneaks into the house and kills the vicious rat, getting injured in the process, but accidentally knocks over Lulu's crib. He is caught by Jim, Darling and Elliot who assume he was attacking Lulu.

Just as Elliot takes Tramp away to be euthanized, Lady uncovers the rat and proceeds to chase down the carriage with Trusty and Jock's help. The dogs catch up to the carriage and scare the horses, causing the carriage to collapse. Lady finds Tramp seemingly dead from the crash and begins to cry but he eventually wakes and they reunite. The Dears arrive, having realized that Tramp was protecting Lulu, and decide to adopt him, saving him from Elliot.

By next Christmas, Tramp has been fully accepted into the Dear household and given his own collar while Jock's owner has adopted two young puppies named Dodge and Ollie who Trusty and Jock take to like an uncle and aunt. Lady and Tramp happily spend the holidays with their perfect family, never to be parted again ("Peace on Earth").

In July 2018, Justin Theroux joined to voice Tramp, while Sam Elliott joined the cast to voice Trusty, and Ashley Jensen joined the cast as Jock. By the end of the month, Kiersey Clemons entered talks to portray Darling, Lady's owner. In August 2018, Tessa Thompson was announced to be voicing Lady, and Benedict Wong also joined the cast in a voice role.

Si and Am were replaced by two new characters, whose song from the 1955 film was remade into a new version.

The film began shooting in Atlanta, Georgia and Savannah, Georgia on September 2018.[11]

On December 17, 2018, it was confirmed that real-life dogs would be used to portray the characters.[12] Much like the Air Bud films.

The film was going to feature a new version of "The Siamese Cat Song", performed by Janelle Monáe.[13] The song would have been re-written by Nate "Rocket" Wonder, Roman GianArthur, and Monáe due to both its modern-day perceived racist connotations and to fit the characters' depictions in the film.[13] The song was ultimately reworked as a blues song titled "What a Shame".[14] Monáe will also perform two new songs for the film.[13] On August 23, 2019, Joseph Trapanese was revealed to be composing the film's score.[15][16] The soundtrack, featuring Trapanse's score, as well as songs from the original film performed by the remake's cast, was released on November 12, 2019.[17]

The first trailer for the film was released on August 23, 2019.[18][15] The film was released on November 12, 2019, exclusively on Disney+.[19] On October 14, 2019, a second trailer featuring new footage as well as the song "He's a Tramp" was released.[20] On November 6, 2019, Disney released a featurette which presented each of the dogs chosen to portray the main characters which were rescued from animal shelters and foster homes.[21]

On the review aggregation website Rotten Tomatoes, the film holds an approval rating of 64% with an average rating of 6.21/10, based on 33 reviews. The site's consensus reads: "Lady and the Tramp's cute dogs and likable cast work well enough, but the live-action update lacks some of the magic that made the original 1955 film such a delight." Metacritic, which uses a weighted average, assigned the film a score of 49 out of 100 based on 7 critics, indicating "mixed or average reviews."

Differences from the 1955 original film 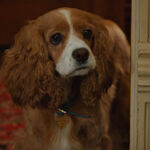 The rat in the live-action remake

The center of your people's world