Lady of the Lake

Lady of the Lake

The Lady of the Lake from Arthurian Legend

The lake in middle of Central Park

“Isle of towers glass and stone. The lady waits for him alone. Ebon glass in emerald frame, pure white lilies speak her name.”
―Griff speaking of the Lady of the Lake in a riddle.

The Lady of the Lake is the Child of Oberon. It seems that she is connected with water. She appears to be kind and wise, and helped King Arthur to gain his sword Excalibur again. She is featured in the Disney animated series Gargoyles.

The Lady of the Lake looks like a beautiful silver-haired woman in a gown of white samite. She is accompanied by small water sprites and has power over water itself.

The enchanted sword Excalibur is in the Lady's keeping; in King Arthur's time, she gave the sword to him, but received it back after his final battle. She was one of the three women who bore the wounded Arthur away to Avalon after the Battle of Camlann, the other two being Nimue and Morgana le Fay. When King Arthur and Griff were brought to New York on their quest for Excalibur, they, accompanied by the Trio and Hudson, encountered the Lady of the Lake in a lake in Central Park. She told Arthur that he must prove himself worthy of Excalibur once again, and tested him by pitting him against a Water Djinn, which he vanquished with the help of the gargoyles. Afterwards, she showed him where the sword lay, in the stone dragon statue in the center of the maze in the Brooklyn Botanical Gardens, and then she disappeared. Shortly thereafter, the Lady of the Lake returned to Avalon for the Gathering. 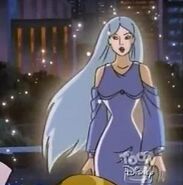 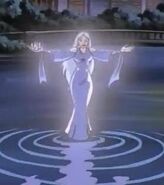