Lagoona Gator is a resident of Typhoon Lagoon, being a resident alligator which came to flourish following the hurricane that terraformed Placid Palms. Lagoona is noted for having a successful history of beach parties, music-playing and surfing.

He came to reside under the heavily damaged clock-tower along the lagoon and the tourist-trade of the locals would make him the lagoon's mascot.

He was created in the late 90s in response to the popularity of his Blizzard Beach counterpart, Ice Gator. While Ice is a skier and sledder, Lagoona is a surfer.

When first entering the park, a sand sculpture (in reality a statue) of Lagoona Gator can be seen. Within the park, Lagoona's "home" can be found at the board room under the clock tower, featuring memorabilia related to his surfing career. Lagoona will make appearances here for meet 'n' greets. 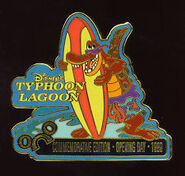 Retrieved from "https://disney.fandom.com/wiki/Lagoona_Gator?oldid=4250266"
Community content is available under CC-BY-SA unless otherwise noted.