Lake Siegel Bell is an American actress, comedian, director, and screenwriter. She is known for starring in TV series, such as Boston Legal and Children's Hospital. She also voiced Chloe the cat in Universal/Illumination's The Secret Life of Pets and its sequel.

For Disney, she voiced Lux in the Tron: Uprising episode "Identity". She also played Brenda Paauwe Bernstein in the 2014 biographical sports film, Million Dollar Arm and Rio in the ABC TV show, Bless This Mess. She also voiced Natasha Romanoff/Black Widow in the Marvel Cinematic Universe animated TV series What If...? and will portray a to-be-confirmed character in the 2022 film Black Panther: Wakanda Forever. 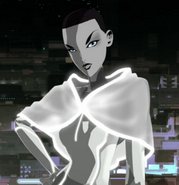 Lake Bell speaks at the Bless the Mess panel at the 2019 Winter TCA Tour.