Disney Wiki
Register
Don't have an account?
Sign In
Advertisement
in: People, 1960s births, People from Maryland,
and 14 more

Stephanie Day (2011-present)
Lance Reddick is an American actor, voice actor, and musician. He is best known for his role as Cedric Daniels in HBO's TV series The Wire and Phillip Broyles in Fox's Fringe. He is also prominently known for his role as Matthew Abaddon in ABC's Lost. Additionally, he appeared in films, such as White House Down and John Wick.

For Disney, he voiced Cutler in the Disney XD animated series Tron: Uprising and General Lunaris in the DuckTales reboot. He was also the voice of Falcon in The Avengers: Earth's Mightiest Heroes. 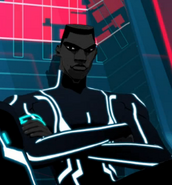 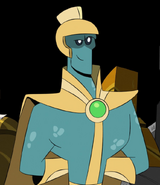 Lance Reddick speaks at the Fringe panel at the 2012 Summer TCA Tour.

Lance Reddick speaks at the Bosch panel at the 2016 Winter TCA Tour.
Community content is available under CC-BY-SA unless otherwise noted.
Advertisement