The Land of Departure (also known as Castle Oblivion) is a world in the Kingdom Hearts series. It first appeared as the Castle in Kingdom Hearts: Chain of Memories until it was formally introduced in Kingdom Hearts Birth by Sleep. It is the original "hub" world of Kingdom Hearts Birth by Sleep and the home of Terra, Aqua, Ventus, and their master, Eraqus. It is in this world that Keyblade apprentices qualify for their Mark of Mastery. When it was transformed into Castle Oblivion, it was briefly superseded by Marluxia and Organization XIII. Due to the complex and puzzling nature of the Castle's infrastructure, none excluding Aqua can navigate the inside easily.

The Castle would resume its form of the Land of Departure in Kingdom Hearts III.

The Land of Departure makes its first appearance in the prequel, where its origin as Castle Oblivion is revealed. At the beginning of the game, Eraqus prepares two of his three apprentices—Terra and Aqua—for their upcoming Keyblade Master exam, although Ventus will not since he is not ready. Knowing they would be split up during a great adventure, Aqua distributes tokens to her fellow Keyblade apprentices, stating that through them they will always be together. After completing the exam, Aqua graduates to Keyblade Master while Terra fails due to the darkness in his heart.

Sometime after Ventus returns to the Land of Departure, he finds himself at swordpoint by Eraqus himself who seeks to prevent Xehanort from using Ventus. Terra arrives and fights Eraqus to stop him from executing Ven; after losing to Terra, Eraqus berates himself for striking his own students before he is murdered by Xehanort from behind. Without Eraqus, the Land of Departure becomes shrouded in darkness, destroying most of the castle. After Ventus loses his heart and falls into a comatose state, Aqua returns to the destroyed castle with Ventus, carrying him on her back. She places Ven in the middle throne and, using Eraqus's Keyblade, activates the device which transforms the Land of Departure into Castle Oblivion to prevent darkness from taking over the world. The new castle and layout would also be designed to keep unwanted visitors from gaining full access to it, ensuring Ventus would be safely hidden. From there, Aqua leaves Ven in a chamber, known now as the Chamber of Waking, and departs.

Castle Oblivion is found by Xemnas of Organization XIII, who decides to convert it into a second headquarters for the Organization. Marluxia is entrusted with control over it, but was secretly plotting to overthrow the Organization leader. After defeating Ansem, Seeker of Darkness, and restoring the damaged worlds, Sora, Donald Duck, and Goofy follow a path that leads into Castle Oblivion, which then forces them to fight through the castle to regain their memories. Behind the scenes, Sora's memories are manipulated by a girl named Namine so that Marluxia could use Sora as a puppet against Xemnas. Meanwhile, Riku awakens within the basements of Castle Oblivion and faces Organization members Vexen, Lexaeus, and Zexion to counter Marluxia's use of Sora, but they are all eliminated by Riku.

Ultimately, the plan to control Sora fails thanks to the meddling of Axel, who frees Naminé, and Marluxia and Larxene are destroyed at Sora's hand. Sora then uses one of Xemnas's Memory pods so that Naminé can restore his memories, and is eventually moved to Twilight Town. Riku is able to make it to the castle's top and discovers his friend's state, where he decides to depart from the castle to help while Sora is sleeping.

Castle Oblivion makes its final appearance in the third installment. After she is rescued from the Realm of Darkness, Aqua joins Sora, Donald, and Goofy on a venture back to the Castle to reunite Ventus' heart (currently residing inside Sora) with his comatose body. With her power as Keyblade Master, Aqua is able to restore Castle Oblivion into the Land of Departure and lets them find Ventus in the castle's throne room. Unfortunately, this leaves the land accessible to Vanitas, as he infiltrates the castle to reclaim Ventus. Aqua does battle with Vanitas to protect her friends until she takes the force of a fire spell meant for Ventus and is rendered unconscious. Sora, and by extension Ventus, watches Vanitas preparing to finish her with his Keyblade; the intense moment causes Sora to free Ventus' heart and return it to Ventus' body. Awakened, at last, Ventus propels forward to block Vanitas' Keyblade with his own, which forces Vanitas to retreat.

In the game's epilogue, Aqua, Ventus, and a now-revived Terra return to the Land of Departure, where they set up a memorial to the fallen Eraqus adorned with their Wayfinders. 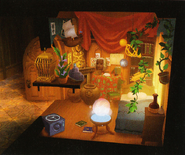 The Mountain Path, an area beyond the castle.

Land of Departure shrouded in darkness.

The Keyhole of the Land of Departure.

Retrieved from "https://disney.fandom.com/wiki/Land_of_Departure?oldid=4440088"
Community content is available under CC-BY-SA unless otherwise noted.