Disney Wiki
Register
Don't have an account?
Sign In
Advertisement
in: Objects, Tangled objects, Once Upon a Time objects,
and 3 more

Tangled Ever After
Olaf Presents

Tangled: The Series
Once Upon a Time
Sofia the First

The Lanterns of Disney's 2010 animated feature film Tangled, appear at the festival for the lost princess, in hope that they will guide her home.

The lanterns start out as a celebration for the baby princess Rapunzel. The King and Queen launched one into the sky, and it rose up into the heavens. When Mother Gothel kidnapped the baby princess to keep herself young and beautiful, the lantern launching tradition began. Ever since then, on the princess' birthday, they launch thousands of glowing lanterns into the sky in hope that she will be guided home by them. While growing up, Rapunzel was fascinated by them and wanted to see them in person. She does end up seeing them with Flynn Rider and is fascinated by them. She eventually learns her true identity as the Lost Princess and manages to escape Mother Gothel with Flynn and return home.

The lanterns play another substantial role in the series. In "The Quest for Varian", a lantern attaching a letter appeared in Rapunzel's nightmare. Later, Rapunzel found the same lantern alongside her statue. The lantern left a message and a key from Varian to seek Rapunzel's help. In the end events of "Secret of the Sun Drop", many lanterns floated above Old Corona as King Fredric was finally allowing Rapunzel to follow her destiny, as the black rocks had created a path for her to follow, and the lanterns would once again serve as her guiding light home.

In "King Pascal", some of the lanterns are discovered floating onto an island named Tirapai and become the decorations of Lorbs, the natives of the island. In "Happiness Is...", Rapunzel finds the lantern with a letter from King Frederic that was written to her when she was seven years old. The letter is about how King Frederic misses his long lost daughter and it leads Rapunzel to feel homesick. Afterwards, Rapunzel delivers a lantern to express her homesick feeling and the support from her friends. The lantern eventually arrives at Corona and is seen by King Frederic and Queen Arianna.

The lanterns first appear in the episode "One Little Tear". After Rapunzel is kidnapped by Gothel, they are lit by her daughters, Anastasia and Drizella, in hopes she finds her way back to them. Years pass, and Rapunzel is believed to be dead. She manages to escape the tower she is held captive in, and follows the lights, reuniting with her family once again.

The lanterns reappear in the episode "Sisterhood". After the dark curse, Rapunzel is killed and Anastasia goes missing, so Drizella, now under the new name Ivy, lights up the lanterns once again, in order to draw out her sister.

The King and Queen of Corona release the lantern

Rapunzel and Eugene sending their own lanterns

The Lanterns from Rapunzel's tower window

The message from Varian

Lanterns celebration in Tangled: The Series

The Lanterns in Tirapai Island 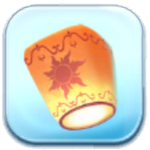 The Lanterns covering the castle in Kingdom Hearts III

The Lanterns in Aladdin 2019

as the "Princess Finder" badge in Disney Heroes: Battle Mode