Lena and Hannah
Laraine Newman is an American comedian, actress, voice artist, and writer, who voiced Lucinda's mother Marla in Sofia the First (replacing Tracey Ullman), Aurora and Professor Hootsburgh in Doc McStuffins, Kaia in Motorcity, Lacey Ladybug in The Buzz on Maggie, Mrs. Andersen's Fear in Inside Out, Betsy in Toy Story of Terror!, Gram in Wander Over Yonder, Carla in Jungle Junction, Narcisa in Vampirina, and Miss White in Milo Murphy's Law. She also provided additional voices for various Pixar films.

Newman was born in Los Angeles, California and attended Beverly Hills High School and graduated from there in 1970. She took her first Improvisational theatre classes when she was 15. After finishing high school she auditioned for four acting schools in England including the Royal Academy of Dramatic Art, London Academy of Music and Dramatic Art and Bristol Old Vic. She was not accepted after the second round of auditions for all four schools, so she went to Paris to study mime with Marcel Marceau. By the age of 19, Newman returned to the United States, and moved to Los Angeles, where she became a founding member of the pioneering comedy improvisational group The Groundlings.

In 1974, she was approached for a spot on a new comedy variety show which would become Saturday Night Live and would appear from 1975 to 1980. In film, she is well known as playing Lawanda Dumore in the 1991 sequel, Problem Child 2. Her other film credits include American Hot Wax, Coneheads, Revenge of the Red Baron, The Flintstones, and Jingle all the Way. She also appeared in television shows, like Laverne & Shirley, Alfred Hitchcock Presents, Friends, Curb Your Enthusiasm, and 7th Heaven.

Other than Disney, Newman has also provided her voice to films like Horton Hears a Who!, Cloudy with a Chance of Meatballs, The Lorax, The Boxtrolls, The Secret Life of Pets, and Sing as well as shows, like The New Batman Adventures, The Oblongs, As Told by Ginger, The Fairly OddParents, Danny Phantom, Avatar: The Last Airbender, Winx Club, Kung Fu Panda: Legends of Awesomeness, The Adventures of Puss in Boots, Trollhunters: Tales of Arcadia, and Bob's Burgers.

Lacey Ladybug
(The Buzz on Maggie)

Mrs. Andersen's Fear
(Inside Out) 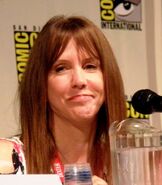 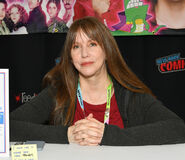