Drowns in a river
Latham Cole is the main antagonist of Disney's 2013 western film The Lone Ranger.

He believes that a country's greatness lies in its ability to expand its borders to the farthest reaches – no matter the cost.

Cole seems generous and kindhearted at first but, over the course of the film, he reveals that he is really a completely ruthless businessman who is after nothing more than money and power. He sees controlling the railroad as a way to obtain the power he desires, and sees himself as a good man who will build a greater place for the future, one which others will thank him for, thus showing signs of both delusions of grandeur and megalomania. He wants to kill the Ranger and Tonto simply to stop them interfering with his plans. He also was willing to start a war and to slaughter all the Indians to achieve his goals, thus revealing that he is completely without morals or limits.

Latham Cole fought in the civil war, and gained a reputation for doing so. He suffered a great personal injury during battle, leaving him unable to father children. He was at the Battle of Gettysburg and watched the eleven thousand casualties before lunch. This left him with an understanding that sacrifice was necessary for change to occur.

He seems to be a good man at first, giving speeches on the future of the transcontinental railroad and assuring the Comanche that as long as there is peace between the two, all treaties will be honored. He also shows an attraction to Dan Reid's (The Lone Ranger's brother) widow, Rebecca and her son Danny, who he hopes to take as his family as he is unable to have one of his own. He later has a friendly regular conversation with the Lone Ranger (who, at that point is known as John Reid, as he hadn't taken up the mantle just yet) praising him and telling how good it is to see another educated man in town.

Following the Lone Ranger capturing Butch, he takes him to Cole, so he could be tried. Over dinner with the Lone Ranger, Cole starts talking about how he hates Butch. However, as the conversation goes on, he starts to reveal his true colors. It is soon revealed that it was Cole who hired the outlaw Butch Cavendish to start a war, by making it look like the Comanche have violated the treaty, so he can build a railroad through their land. He and Butch have known each other for years, being "brothers born in the desert". He also used the new railroad to take all the silver that he and Butch discovered many years earlier, and which they had murdered an entire village of Comanche (who had nursed them back to health after finding them unconscious in the desert) just to keep it a secret.

After revealing his true intentions, including how he was a murderer of Dan too, he attempts to kill the Lone Ranger and Tonto so that he doesn't interfere with his plan of taking over the railroad industry by force. He slowly reaches for a gun to kill the Ranger, but the Ranger manages to figure out his intentions based upon his comments and several clues around, including the sight of the adjusted railroad map. He turns to shoot him only to see the Ranger had vanished, The Ranger catches him by surprise and holds him at gunpoint. However, Cole manages to regain the upper hand with help from Cavendish, and lures Captain Jay Fuller to his side by promising silver for him. Fuller, choosing to side with Cole, puts the Ranger to death by firing squad. However, the Ranger's companion, Tonto, manages to save him, but then the Comanche attack, forcing Cole to run. Believing them both to be dead, he leaves, taking Rebecca, Danny and all the silver with him.

At the grand opening of the railroad, Cole is congratulated by the Railroad chairman, before Cole leads him and the other officials away, where he reveals his evil plan to them and forces them at gunpoint to appoint him the new chairman after shooting the old one in the back when he tries to stop him. However, the Lone Ranger and Tonto steal the silver he was going to use to buy all the shares thereby making him the owner of the railroad. Cole and Butch give chase in another train while Fuller fights on the other train. Following a lengthy chase, he manages to regain the silver and finally confronts Tonto at gunpoint planning to kill him right then and there.

However, the Lone Ranger manages to shoot the gun out of his hand (from the top of the cliff on Silver's back, with his last bullet, which happens to be the Silver bullet Tonto made to kill the "Wendigo" earlier) saving his friend. Tonto knocks Cole down, holds him at gun point with his own gun and then throws back the cheap pocket watch which Cole had paid him twenty six years earlier in return for showing him and Cavendish the location of the silver while telling him it was a "bad trade." Tonto jumps onto the other car and detaches the carriage between them. As the train is about to cross the railway bridge, Tonto and the Lone Ranger destroy it with Cole's own explosives which he had used to illegally mine the silver, causing the train to plunge into the river below. Cole tries to swim to the surface, but ends up being crushed and buried by the very same silver that he greedily took and murdered for, causing him to drown.

Cole realizes that his crimes have been exposed. 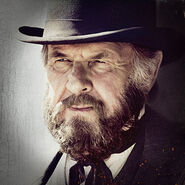 "Bad Trade"
Add a photo to this gallery
Retrieved from "https://disney.fandom.com/wiki/Latham_Cole?oldid=3914907"
Community content is available under CC-BY-SA unless otherwise noted.