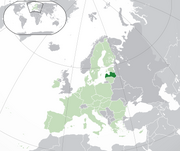 Latvia (Latvian: Latvijas Republika) is a country in North Eastern Europe. It is one of the three Baltic states, along with Estonia and Lithuania, bordering both of them by being in the middle. After centuries of occupation and rule by Polish, Swedish, German and Russian forces, it gained independence in 1918, however it had to be freed from Soviet rule thereafter. Like most countries of Eastern Europe, Latvia was invaded by the Nazis and had a significant amount of its Jewish population massacred. Christianity is the most dominant faith there, however some people have been converting to paganism. Its capital is Riga and it has a population of 1.9 milllion.