1
Laura San Giacomo is an American actress and voice actress. She is probably best known for playing Maya Gallo on the NBC sitcom Just Shoot Me! (1997–2003).

For Disney, she voiced Fox Xanatos in Gargoyles, although due to her contract, she was never credited for the role. She also played Kit De Luca in the 1990 Touchstone Pictures comedy film, Pretty Woman and Marjorie Kersey in Grey's Anatomy.

Fox Xanatos
(Gargoyles)
Add a photo to this gallery 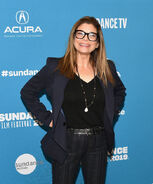 Laura San Giacomo attending the 2019 Sundance Film Fest.
Add a photo to this gallery
Retrieved from "https://disney.fandom.com/wiki/Laura_San_Giacomo?oldid=4314705"
Community content is available under CC-BY-SA unless otherwise noted.