Barley causing trouble, her husband's death, her sons in danger, Blazey scurrying around her feet

Laurel Lightfoot is an elf and a major character in the 2020 Disney/Pixar animated feature film Onward. She is the mother of Ian and Barley, and widow of Wilden Lightfoot.

LAUREL LIGHTFOOT (MOM) is a hardworking, sardonic and devoted single mom who throws herself whole-heartedly into everything she does. Laurel lost her husband years ago, but her drive and determination helped her overcome the hardship and make the most of her life with her much-loved sons, Ian and Barley.

At some point, Laurel met, dated, and eventually happily married Wilden Lightfoot, and then had their first son with him, Barley. A few years after, Laurel became pregnant with their second child, but alas Wilden fell ill. According to Laurel, Wilden fought his sickness as hard as he could because he wanted to meet their second child. Unfortunately, the sickness was too much. Shortly after Wilden passed away, Laurel gave birth to her second son, Ian, and raised her sons by herself. As her boys grew into their teens, Laurel moved on and started dating a centaur police officer named Colt Bronco.

Laurel is a warm and loving mother who deeply loves her sons, willing to risk life and limb to protect them. She also encourages them to overcome their insecurities. Whenever something is depressing them, she does her best to cheer them up and have them look at things in the positive light. It is also shown that she worries for her son's differences and how they could get each other into more trouble.

Laurel is also very bold, boisterous, and fierce, able to tolerate and have fun with Barley while still parentally concerning his unkempt lifestyle. She playfully teases Ian from time to time as well, although he isn't very big on that. Despite her wild personality, she, like most other people in this day, is naive and uninterested in the questing way and gets a little nervous of the unfamiliar dangers she and The Manticore are putting themselves in, but, especially by the climax, she holds firmly to her devotion to her boys and is willing to go through all this just for them.

Although she misses her husband, Laurel has moved on and is now dating Colt Bronco, whom she is comfortable enough in their relationship to discuss her sons with him. When her sons head off on a potentially dangerous journey to bring Wilden back, Laurel doesn't hesitate to search for them on a quest of her own. She quickly becomes good friends with The Manticore when they join forces to save her sons and are implied to go on adventures together at the end of the movie.

Laurel is first seen exercising to a workout video when Ian comes downstairs and she wishes him a happy 16th birthday. She gives him "My baby's all grown up" kisses and notices he is wearing his dad's old college sweatshirt. She encourages Ian to try new things on his birthday like inviting some of his classmates to his party while making herself a protein shake. When Barley holds Ian in a headlock and urges him to fight himself free, Laurel simply tells him to let go and he drops him. Barley then tries with his mom, who throws him over her shoulder onto the ground. With this fun little moment over, she sternly tells him to take out the trash. Colt Bronco arrives and shows footage of Barley firmly protecting an old fountain scheduled to be demolished and Laurel is upset. She invites her boyfriend to come in and scolds her oldest son, telling him that he needs to "start thinking less about the past and more about [his] future". When Barley accidentally tears Ian's sweatshirt, Laurel tenderly comes over and cuts the thread, saying she will fix it later that night.

After Ian comes home from school, Laurel steps on one of Barley's Quests of Yore figurines right outside his bedroom door. She opens it and kicks the figurine in, playfully yet sternly telling him to pick up after himself. As she leaves to the living room, she announces this as "the world's longest gap year". She finds Ian sewing the tear in Wilden's sweatshirt and playfully states that he must have been taught by "some kind of sewing master". Ian asks her if his late dad was always so confident and Laurel says that it took him a while to find out who he was. She then says that when he got sick, he fought as hard as he could so he could see his next son. Feeling sorry for her son, she decides to give her boys their father's gift now instead of after they have cake.

The gift turns out to be a wizard staff, along with a message and a spell from Wilden, saying he left his sons this staff and spell to bring him back to life for one day. Laurel is bewildered by this strange gift and states that although Wilden got into some stuff when he was sick, he wasn't a wizard, but an accountant. Although Barley wholeheartedly tries his best to cast the spell, it doesn't work. The disappointed family sit together on Ian's bed and Laurel tries to put a positive spin on it, saying the spell is proof that Wilden wanted so much to meet them so much, that he'd try anything and that it was the thought that counted. After Barley leaves, Laurel asks Ian if he wants to come with her to pick up his birthday cake. Ian says no, but thanks, giving her a small smile. Taking one last sympathetic look at her son, she leaves the room.

When she returned a short while later with cake downstairs, she found a message from her sons that they'd be back with a surprise, and clues that pointed her towards the Manticore's Tavern. Driving there, she found it to be on fire and found out from the restaurant owner, Corey the Manticore, that Ian and Barley had come to her, looking for help to find a Phoenix Gem, but unfortunately she'd failed to mention a curse involving the gem. Laurel is alarmed and eludes The Manticore into her car by picking up a first aid kit and telling a nearby cop with that she has to go and patch up a scratch on The Manticore's leg before it leads her to going insane. Later, the worried mother asks The Manticore what this curse does and learns that if the gem is removed from its hiding place, the curse would conjure a "beast" and the only way to destroy it was with her sword, the Curse Crusher, which Corey had unfortunately sold to a pawn shop a while back. Laurel steers the car to the pawn shop and hopes her sons will stay out of trouble.

They stopped to buy it back from the pawn shop owner, Grecklin, but when she hears Corey mention the sword is one of a kind and forged from rare metals, she charges $10,000 for it. Laurel is about to scold Grecklin, but is interrupted by a call from Colt, who says her sons where last seen heading North and that this night keeps getting stranger and stranger. Laurel looks at Grecklin openly regarding The Manticore's strange appearance and elf says she agrees with Colt. She holds the call and tries to explain to the owner that they desperately need the sword so her sons can see their father, but before this goes on, The Manticore stabs Grecklin's neck with her scorpion tail, causing her to collapse. Laurel reacts in horror, thinking the venom killed her, but Corey assures her that she's merely temporarily paralyzed. The women grab the sword and leave the shop, Laurel nervously leaving behind some money for it and complimenting the store as she flips the sign to say that it's closed. As the women cheer over their victory, Colt worriedly asks what's going on. Reminded of their talk, Laurel quickly says "Colt, I can't talk, the boys need me" and hangs up, driving away.

The next morning as they're driving, Laurel calls Colt and tells him that they know where the boys a headed and they need to stop them before they unleash the curse. While she takes one of many energy drinks The Manticore has been gorging herself with, she hears from Colt about the Ian driving away from him and the police. Laurel says has a positive reaction to this, stating Ian's fear of driving. Just then, when a sprite crashes onto her windshield, startling her so that she drives off-road and wrecks her car. But then Laurel gets an idea after seeing the rest of the Pixie Dusters free their gang member and fly off and suggests Corey re-familiarize herself with her wings.

Later, after Barley finds the gem and accidentally invokes the curse that creates a dragon made of stone and debris, Laurel, riding on Corey's back, flies down to face the monster. The returned warrior is able to cut off the dragon's wings but is eventually knocked down, injuring her back. Taking up Curse Crusher, Laurel boldly charges up the monster's back and, declaring herself a mighty warrior, jabs the sword down a small opening, slightly piercing the curse's core and freezing it in place. She struggles to keep the sword in as long as possible while her sons work on bringing their father back. Pretty soon, the curse pushes Laurel right off the dragon's back, flinging the sword into a mass of debris. She warns the boys that the dragon is coming and rushes to the mass, struggling to reach the Curse Crusher. Eventually, just as it's about to fall completely out of reach, she grabs the tip and hurls it to Ian, who uses the velocity spell to shoot it right into the Curse Dragon's open core. Debris flies everywhere and Laurel is knocked over again. Colt arrives on the scene and picks her up. The couple watches from a distance as Barley and Wilden share a quick word before he disappears. They smile tenderly as the Barley discusses to Ian what they talked about and share a hug.

At the epilogue, she is happy to hear from Ian that his day at school was great. She says she's leaving for a night out with the Manticore, picks up a double-headed battleaxe, and kisses Colt goodbye as he leaves to do police work.

Laurel in a deleted scene

"I am a mighty warrior."

"Barley, keep your soldiers off my land or our kingdoms will go to war!" 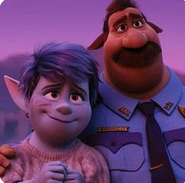 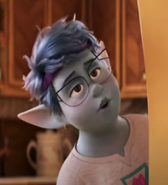 "Wow. You must've been taught by some kind of sewing master."

"He just said to give you this when you were both over sixteen. I have no idea what it is."

"Hey, hands off, Mister! Those are for your party tonight." 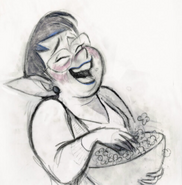 "I AM A MIGHTY WARRIOR!" 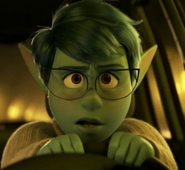 Retrieved from "https://disney.fandom.com/wiki/Laurel_Lightfoot?oldid=4493842"
Community content is available under CC-BY-SA unless otherwise noted.