1
Lauren Johanna Faust is an American animator, writer, storyboard artist, and producer, best known for developing the animated series My Little Pony: Friendship is Magic, as well as working on The Powerpuff Girls and Foster's Home For Imaginary Friends with her husband, Craig McCracken. She is also a creator of the toyline Milky Way and the Galaxy Girls.

For Disney, she worked with McCracken as a co-producer, writer, and story editor for the Disney Channel animated series Wander Over Yonder. It was known on July 2013 that she wasn't working on Season 2. 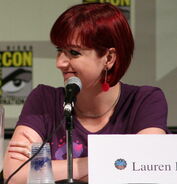