3
Lauren Michael Holly is an American-Canadian actress. She is known for roles, such as as Deputy Sheriff Maxine Stewart in the television series Picket Fences and Mary Swanson in the 1994 comedy Dumb and Dumber.

For Disney, she voiced Chichiro's mother in Spirited Away. She also played Lynn Harper in the ABC Studios TV show, Designated Survivor. 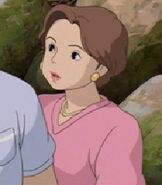 Chichiro's Mother
(Spirited Away)
Add a photo to this gallery

Lauren Holly attending the 2019 Toronto International Film Fest.
Add a photo to this gallery
Retrieved from "https://disney.fandom.com/wiki/Lauren_Holly?oldid=4300357"
Community content is available under CC-BY-SA unless otherwise noted.