Oliver
Lauren Tom (born August 4, 1961) is an American actress, voice actress, and comedian. Her roles include Julie in the NBC sitcom Friends, Dot in the final season of Grace Under Fire, and the voices for both mother and daughter characters on three animated TV comedy series: on Futurama she voiced Amy Wong and her mother Inez, on King of the Hill she voiced Minh and Connie Souphanousinphone and finally she voiced Numbuh 3 and her mother Genki in Codename: Kids Next Door.

She also played Lois in the 2003 Miramax film Bad Santa, Lena St. Clair in The Joy Luck Club, Claudia Ford in Escape to Witch Mountain, and Amy in the 1994 Touchstone Pictures film When a Man Loves a Woman. She plays Celia Mack in Andi Mack. 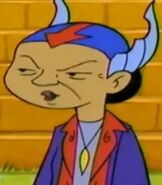 Celia Mack
Add a photo to this gallery

1299.jpg
Add a photo to this gallery
Retrieved from "https://disney.fandom.com/wiki/Lauren_Tom?oldid=2999544"
Community content is available under CC-BY-SA unless otherwise noted.