Lava is a short film attached to the theatrical release of Inside Out. It was directed by James Ford Murphy and produced by Andrea Warren.[2] It is described as a "musical love story taking place over millions of years that is inspired by the isolated beauty of tropical islands and the explosive allure of ocean volcanoes". The story follows the love story of two volcanoes, Uku and Lele. It features a song, "Lava", which is written by Murphy and performed by Kuana Torres Kahele and Napua Greig, who voice the two volcanoes.[1][3]

Lava premiered in August 2014 at the Hiroshima International Animation Festival.[1]

Uku is a lonely volcano lost in the ocean. Inspired by the animals he sees around him, he sings every day a song where he expresses his wish to have someone to "lava". But millions of years go by, and he starts to sink into the ocean, still alone. However, unbeknownst to him, another volcano, Lele, has been growing underwater toward the surface, fueled by the love of his song. Years later, Lele is a tall volcano at the surface of the ocean. However, she is looking in the wrong direction and cannot see the sinking Uku just behind her. She sings Uku's song and Uku, now underwater, hears her sing. It fuels him with so much love that his fire is reanimated and he enters in eruption again. Years later, Uku and Lele are joined together and form a single island as they sing about their happiness.

James Ford Murphy had the inspiration for the short from Hawaii and its culture, where he had his honeymoon 20 years ago. He learned to play ukulele, and eventually composed the song at the basis of and featured in the short.[4] An important inspiration for the music was Israel Kamakawiwo’ole’s rendition of Somewhere Over the Rainbow.[5][6]

Murphy was interested in making a character that would also be a location. He said "I thought it would be so cool to fall in love with a place who’s also a character. I wanted to make Uku appealing and likable but also look like he’s been carved out of lava flows."[1]

On the technical side, the short was an exploration of large scale shots, which tend to be difficult for computers to process.[1]

The team also struggled with the fact a volcano is fixed and shouldn't be moving.[5] Supervising Animator Aaron Hartline mentioned that they found the sense of scale was lost if Uku's movements were too important, and as such his expressions had to be communicated mainly through his eyes and mouth, whose stretching had to be limited too.[7] The problem of his immobility was also solved by varying camera angles and involving mobile elements like animals or clouds.[5]

Uku's face is based on those of his voice actor Kuana Torres Kahele, Jackie Gleeson, and the bulldog in Feed the Kitty.[5] In addition, Hartline indicated Uku is largely based on Israel Kamakawiwo’ole, as they wanted to convey the same impression of a "gentle giant."[7] 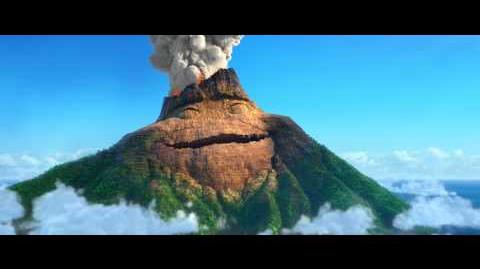 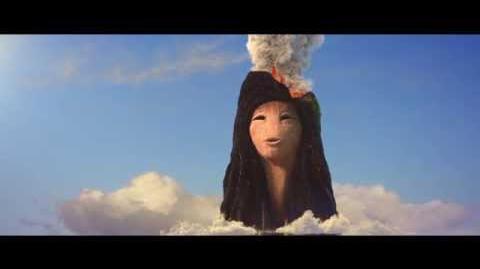 Lava - Clip 2
Add a photo to this gallery

Uku, the main character of the short

Retrieved from "https://disney.fandom.com/wiki/Lava?oldid=3586332"
Community content is available under CC-BY-SA unless otherwise noted.