He is also the father of fellow directors Jake Kasdan and Jonathan Kasdan.

For Disney, Kasdan wrote the remaining screenplay for George Lucas' Star Wars sequel The Empire Strikes Back after the death of Leigh Brackett, who wrote the first draft. Lucas later commissioned Kasdan to write the screenplay for Return of the Jedi. 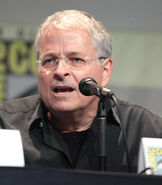 Lawrence Kasdan speaks at the 2015 San Diego Comic Con.
Add a photo to this gallery
Retrieved from "https://disney.fandom.com/wiki/Lawrence_Kasdan?oldid=4380269"
Community content is available under CC-BY-SA unless otherwise noted.