The Castle features two parts, a dungeon type area in the base featuring an Audio-Animatronic dragon, and above, a concrete balcony walk through area with Sleeping Beauty stained glass windows and tapestries. There are also several shops selling glass figures, ornaments and gifts.

"Sleeping Beauty Castle at Disneyland was inspired by the Neuschwanstein Castle in Southern Germany. This European influence was fine for building a castle in Anaheim, but the fact that castles exist just down the road from Disneyland Paris challenged us to think twice about our design." — Tony Baxter, executive designer Walt Disney Imagineering[1]

Since Europe is home to the castles that inspired the structures at Disney's first three parks, Imagineers reconsidered what kind of edifice should stand at the hub of its first European theme park. Many different concepts were then created and considered, ranging from slightly modified versions of Disney's existing castles to radically new structures to stand instead in the Castle's place (for example a Discoveryland-like tower).

The team eventually settled on Imagineer Tom Morris' approach to the established Disney castle. Inspirations cited by Imagineering include illustrations from the book of hours Les Très Riches Heures du Duc de Berry and the Mont Saint-Michel monastery in Normandy. As Charles Perrault had not detailed the castle in his 1697 fairy tale, Imagineering had few restrictions regarding its physical appearance. However, Walt Disney's own designs for the 1959 film Sleeping Beauty provided the inspiration for, among other things, the Castle's surrounding square trees.

The realisation of the stained glass windows in London, which are visible in Sleeping Beauty's Gallery, was overseen by Peter Chapman, who had previously worked on the restoration of Notre Dame de Paris.

The Castle is home to a dragon, which at 27 meters (89 ft) from head to tail was the largest Animatronic figure ever built when the park opened in April 1992. The walkthrough attraction consists of a dimly lit cavern with a large dragon sleeping silently, occasionally it will 'wake up' puffing smoke and growling. The building also contains La Galerie de la Belle au Bois Dormant, a gallery of displays which illustrate the story of Sleeping Beauty in tapestries, stained glass windows and figures. La Boutique du Château, a shop selling Christmas ornaments year-round, and Merlin l'Enchanteur, a shop specializing in handmade glass figures are located on ground floor. It is also one of the only Disney castles to be made of real stone.

Changes throughout the years

The castle has received several overlays over the years. First was the park's 1st Anniversary in 1993; during this celebration, the castle was dressed up as a cake complete with strawberries, icing and candles. This overlay was removed after the celebration ended. The cake overlay concept was later copied by Walt Disney World's Cinderella Castle in 1996 for the 25th Anniversary of the resort. 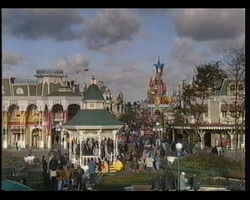 1997 marked the 5th Anniversary of Disneyland Paris; during this celebration, the castle was dressed up in carnival masks, jester hats, frills and bells to promote the animated film The Hunchback of Notre Dame. This overlay lasted until the beginning of 1998.

2002 marked the 10th Anniversary of Disneyland Paris; for this celebration, the overlay was quite basic compared to the previous ones. The front of the castle was fitted with a golden scroll displaying a large 10. Also, the celebration saw the opening of Walt Disney Studios next door. The scroll and all other Anniversary material in the park was removed by early 2003.

In 2007, the castle received another overlay, celebrating the park's 15th Anniversary which started in 2007. It featured golden Disney characters displayed on the turrets and spires, each holding a candle, and Tinkerbell on the highest spire—the candles were 'lit' each night during a special 'Candlebration' ceremony which took place on a raised temporary stage at Central Plaza, in front of the Castle. A huge illuminated gold plaque featuring a large '15' was hung on the front of the Castle. This echoed the overlay that was featured for the 10th Anniversary in 2002. The 15th Anniversary and the 'Candlebration' ceremony finally ended after an extended stay on March 7, 2009. 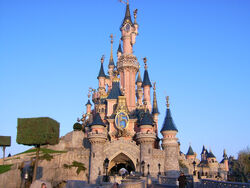 The 15th overlay was to be shortly followed on April 4, 2009 by Mickey's Magical Party, a "theme year" celebration held at the park. The castle was once again overlaid with a Mickey and Friends plaque over the main window, and the spire heads were changed from being characters to being 3 circles "of ribbon" representing Mickey Mouse. A more permanent Central Plaza stage was built outside the castle to host the "It's dance time... with Mickey and Friends" show, which also puts into doubt the future use of the Royal Castle Stage. Mickey's Magical Party is due to end on March 7 and be replaced by Disney's New Generation Festival (which started on April 2), continuing the recent usage of "theme years" that the resort has begun to favor. Although the use of the Central Plaza stage has been extended for another year, no overlay was announced for the castle. 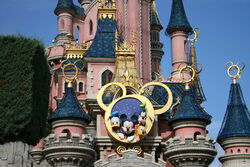 The castle was repainted in a new color-scheme, restored and fitted with multicolored LED lighting during 2011. For the Disney Dreams nighttime spectacular show its moat was fitted with water fountains, the upper window was replaced by doors that open to reveal a LED lighted star and Central Plaza stage was removed in order to increase the viewing area.

In Epic Mickey, the castle was adapted into the game's starting and finishing level, Dark Beauty Castle. This version contained elements of the various Disney castles and even had statues resembling Disney characters.