Beast's Castle (in the study), France

The Beast's temper, the cold forest

Active
Le Plume is a quill, one of the Beast's many servants, and a protagonist in Belle's Magical World, the third film installment in the Beauty and the Beast franchise. 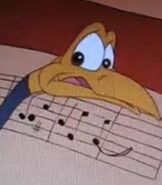