Zoey and Madelyn Deutch
Lea Katherine Thompson is an American actress, dancer, television director, and television producer. She is the mother of actress Zoey Deutch.

She is best known for her role as Lorraine Baines McFly in the Back to the Future trilogy and as the title character in the 1990s NBC sitcom Caroline in the City.

Her Disney roles include Vonnie Zero in Penn Zero: Part-Time Hero, April in the ABC Family TV show, Greek, and Kathryn Kennish in the Freeform TV show, Switched at Birth. She uploaded a picture of herself with Amy Pietz, Kermit the Frog and Steve Whitmire on Twitter on April 13, 2015. A few months later, on August 21, 2015, she uploaded a photo of herself on The Muppets' set along with another post filming on the set on Instagram. 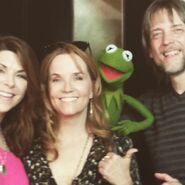 Thompson at the SAMHSA Voice Awards in September 2013 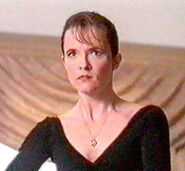 Thompson as Miss Roberts in 1994 family comedy film, The Little Rascals.
Add a photo to this gallery
Retrieved from "https://disney.fandom.com/wiki/Lea_Thompson?oldid=3746995"
Community content is available under CC-BY-SA unless otherwise noted.