"Pay attention. You're daydreaming again."
"Dusty is the best duster I've ever seen."
Leadbottom is a minor character in Planes and in Planes: Fire & Rescue. He used to be Dusty's mentor in cropdusting and forces him to keep his old career . 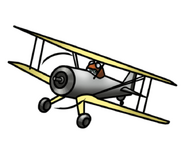 Disney Store
Add a photo to this gallery
Retrieved from "https://disney.fandom.com/wiki/Leadbottom?oldid=1463808"
Community content is available under CC-BY-SA unless otherwise noted.