Unnamed father
Leah is a character in the Marvel Cinematic Universe, featured in the Disney+ series The Falcon and The Winter Soldier. She is a waitress at Izzy, who goes on a date with Bucky Barnes. She makes her debut in the first episode and is portrayed by Miki Ishikawa.

Leah works at the restaurant Izzy, in Brooklyn. She becomes acquainted to Yori Nakajima and Bucky Barnes, who often attend the establishment together.

One day while working there, she notices that Bucky and Yori haven't made their usual order, and jokingly questions if they're feeling a little adventurous. Yori asks Leah out, on the behalf of Bucky, and suggests bingo or pinochle. Bucky apologizes for Yori, but Leah questions why, and confirms she is willing to go. The pair make an arrangement for tomorrow night, but she adds that maybe not pinochle. The following evening, after Leah's shift ends, Bucky arrives, with a bouquet of flowers for her. Their date begins, and she questions whether he's dated much, following the Blip, and Bucky informs her hasn't. He talks of his experience with online dating, which he describes as crazy, and the uncertainty in using it, to which Leah comments that he sounds like her father. She questions how old Bucky is, and he replies that he's 106, which the pair laugh off. She asks why has a glove placed on his hand, and he reveals he has poor circulation. She brings out some board games for the pair to play, and they start off with Battleship. While they do, Leah asks questions Bucky about his family, and she shares how sweet she thinks it is, that he spends time with Yori. Leah comments on how hard it's been, since his son died, and that not knowing how it happened is the hardest part for him. She continues talking on the matter, making Bucky uncomfortable, and he leaves in the middle of their date. 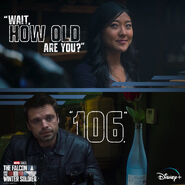