Sofia Bella Pagan
Leah Marie Remini is an American actress, voice actress, producer, author, and comedian. She is best known for her roles as Carrie Heffernan in CBS sitcom The King of Queens and Vanessa Cellucci in Kevin Can Wait. She has also starred in A&E documentary series Leah Remini: Scientology and the Aftermath since 2016.

For Disney, she voiced Doreen the Organizer and Mean Woman in Phineas and Ferb. She also voiced Ms. Baxter in Milo Murphy's Law. 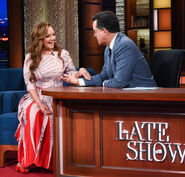 Leah Remini visiting '"The Late Show with Stephen Colbert in August 2016.
Add a photo to this gallery

Retrieved from "https://disney.fandom.com/wiki/Leah_Remini?oldid=4131743"
Community content is available under CC-BY-SA unless otherwise noted.