The Robinsons
Lefty is a character from Disney's 2007 animated feature film Meet the Robinsons, and he also makes a cameo appearance in Wreck-It Ralph. He is a one-eyed purple octopus who lives without water, and works as the Robinson butler.

Lefty first appears when Lewis accidentally rings the doorbell, later When Bud Robinson shows Lewis Robinson around in the future, they come across Lefty again, who opens the door. Lewis thinks that he's a monster until Bud clears things up. Bud then asks Lefty where to get to the garage, so Lefty suggests asking Franny Robinson.

Later on, as the Robinson's were having dinner, Lefty unknowingly allows Doris into the house. Soon after, Lefty helps fight Tiny the T-Rex by wrapping his tentacles around the dinosaur. 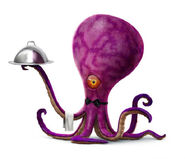 Retrieved from "https://disney.fandom.com/wiki/Lefty?oldid=4411270"
Community content is available under CC-BY-SA unless otherwise noted.