February 18, 2017
"Legacy of Mandalore" is the fifty-third episode of the Disney XD animated series, Star Wars Rebels. It premiered on February 18, 2017, and is the sixteenth episode in the third season.

Taking the Phantom, Sabine, Ezra, Kanan, Fenn, and Chopper arrive at Krownest where the stronghold of Sabine's Clan was. Sabine was going to face her family in the hopes of convincing them and the other Mandalorians to fight alongside the Rebellion against the Empire. Despite everyone's support, Sabine remained worried about seeing her family again. Upon entering the atmosphere, Sabine tries to make contact only for her Mandalorian colleagues to blur their transmissions and launch an attack. Four incoming Mandalorians all fired rockets at the Phantom. Sabine, who was behind the controls, took evasive menuvers to dodge them. The Mandalorians then started shooting firing with their blasters, and took out the Phantom's main thrusters. The Phantom was going to crash, but Sabine managed to get them down safely with minor damage. All in one piece, Kanan, Ezra, and Sabine left the Phantom, while Fenn and Chopper stayed with the ship in case of an emergency. The four Mandalorians who shot them down arrived, accompanied by a Super Commando. The moment Ezra saw him, he drew his Lightsaber starting off a shootout. However, the fight was short lived when the Super Commando recognized Sabine, and was revealed to be Sabine's brother, Tristan Wren. Their reunion is shallow, because much to Sabine's disgust her brother was wearing the armor of an Imperial Super Commando. Following Tristan, Sabine, Ezra, and Kanan arrived at the fortress of Clan Wren, where waiting for them was Sabine's mother, Ursa Wren. She was about to have her daughter taken into custody and be held for trial until Sabine presented the Darksaber to her.

Upon entering the fortress, Sabine is already ill received by her family, for they are still disgusted by her betrayal, as well as the rest of her people. No matter what Sabine tries to say Ursa does not want to listen, and only cares about keeping her people safe from the wrath of the Empire. Then she takes Sabine outside for a private conversation. She confesses to her daughter that she too tried to stop the Empire, but failed and had no choice but to surrender or die. She also tells Sabine that her father is now a prisoner on Mandalore, and if Clan Wren tries to act against the Empire, he will be executed. Sabine also learns that the reason her mother did not come looking for her was because she felt it was for the best. To Ursa running away saved her, and coming back has put her in danger. When Ursa asks Sabine about the Darksaber, and how she got it, she shows more disappointment. She did not win it in battle and nor does she believe that Sabine can wield it. As their argument goes, Ursa calls Sabine immature and selfish, only for Sabine to say back that her mother is the selfish one as well. For her, she put power and politics before family. For a while it is all silence, until Sabine brings up the Rebellion's plan to attack the Empire. She tries to convince her mother in joining the fight, but Ursa is not so sure about it. Just then, Tristan comes in to tell Ursa that she has an incoming transmission. She leaves to take it, leaving Sabine with Tristan. Watching from afar, Fenn spies on Ursa and listens to her talking to Gar Saxon. He hears her saying that she is willing to hand over the Jedi as long as Gar spares her daughter.

Later, Ursa is called to speak with Kanan. He tries to convince her to see the potential her daughter has, but again Ursa does not listen. The matter also gets worse when Ursa learns from Ezra that Sabine fought Gar Saxon, ordering her men to hold the two Jedi at gunpoint. Meanwhile, Sabine and Tristan are having a round of sparring. As they battle against one another, she hears of how distraught he was about the dishonor she brought to their family. He also reveals that he joined Saxon's side for the sake of their father's life. Sabine points out that Saxon cannot be trusted, only for Tristan to say that their mother trusts him enough to trade the Jedi for her safety. When she hears this and the approach of a ship, Sabine fears what her mother has done. She rushes to the throne room to find Ezra and Kanan still held at gunpoint, just as Gar Saxon shows up.

Ursa gives Gar the Darksaber, and hopes he will take the Jedi and spare Sabine. Unfortunately, he goes back on his word and plans to eliminate not just Sabine but also Clan Wren as he now considers them a threat to the Empire. Tristan tries to reason with the Governor, but Gar gives him a choice to stand by his side or die with his family. Without hesitation, he aims his blaster at Sabine, much to the despair of his sister and mother, but to the pleasure of Gar. Then he unexpectedly turns his weapon at Gar, choosing family over him. Gar and his men are prepared to kill, when suddenly Fenn enters the scene and gives Ezra and Kanan their lightsabers after they were confiscated earlier. Soon a firefight begins. Gar tries to strike Ursa down with the Darksaber, only for Sabine to intervene with Ezra's lightsaber. The two Mandalorians engage one another in a lightsaber duel that leads them outside and onto the frozen lake. At first Gar rather easily has the upper hand, but Sabine eventually manages to overpower him and force him on his knees with the two sabers against his neck. However, though tempted, Sabine chooses to spare him rather than kill him. As she walks away, Gar attempts to kill her only to be shot through the heart by Ursa. With Gar Saxon's death, it is guaranteed that there will be chaos once the whole of Mandalore finds out, to which Ursa believes is what they need to become strong again and find a leader worthy of their people.

Later, Chopper arrives with the Phantom to take Ezra and Kanan back to base. Apparently Sabine and Fenn have chosen to stay behind to help Mandalore and perhaps someday join the Rebellion's fight against the Empire. Ezra, Kanan, and Chopper are sad that Sabine will not be coming back with them, but are happy for her. They bid each other farewell, and Sabine looks on as her friends fly away with determination in finding the true leader of Mandalore. 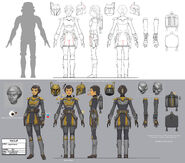 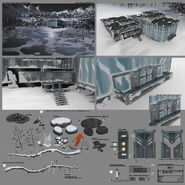 Sabine has Saxon at her mercy

Sad to hear that Sabine is staying behind

Retrieved from "https://disney.fandom.com/wiki/Legacy_of_Mandalore?oldid=3037128"
Community content is available under CC-BY-SA unless otherwise noted.