Lend a Paw is an Academy Award-winning Mickey Mouse cartoon short that was released on October 3, 1941.

Pluto is sniffing around outside when he hears a noise. It's coming from a bag floating on an ice flow in a creek. Pluto rescues it, then loses interest when it turns out to be a kitten. The kitten follows him home and Mickey takes a liking to it, much to Pluto's disgust.

Pluto's devil and angel sides give him conflicting advice. Pluto puts the cat up to mischief, but Bianca the goldfish fingers Pluto as the real culprit, getting him thrown outside.

When the kitten plays with a ball, it rolls and bounces right outside and into a well. The kitten follows and falls in, so it's now up to Pluto to either save it or leave it, but after a push and demand from the angel (and beating the devil), Pluto does his part and saves it

Mickey, meanwhile, had fallen asleep and is awakened by the sound of Pluto calling him. After getting the kitten out of harm's way, he lifts up the pulley to rescue a now-frozen Pluto, Mickey then forgives Pluto and brings him back inside to warm him up in a tub of hot water.

After warming up, the Kitten gives Pluto a sweet little lick to thank him, but this time, Pluto does not seem to mind and his angel side reminds him that kindness to animals is a reward that will be cherished in the end. 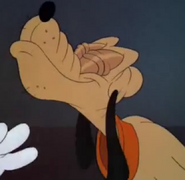 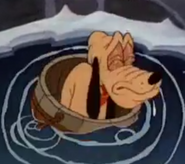 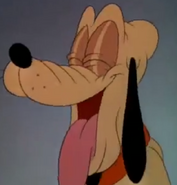 Retrieved from "https://disney.fandom.com/wiki/Lend_a_Paw?oldid=4228540"
Community content is available under CC-BY-SA unless otherwise noted.