Andy's House (possibly in the attic)

Unknown
Lenny is a minor character in the 1995 Disney/Pixar animated film, Toy Story and its 1999 sequel. He is a small binocular toy that formerly belonged to Andy Davis and helped the toys see from far distances by using him as actual binoculars.

In Toy Story, Lenny was one of the first toys to come out into the open room when Woody signaled that the coast was clear. Lenny also appears at the staff meeting before Andy's birthday party in shock that his party was moved to that day, even though Andy's birthday wasn't until the following week. When Hamm alerts the toys that the birthday guests have arrived, Lenny, along with mostly every other toy, except Woody, runs to the window to see what kind of sized gifts his friends are bringing, in fear that Andy may get bigger toys and that they will all be given away. Lenny, in particular, showed great fear when Sarge and his army reported what gifts Andy was receiving.

One of Andy's gifts turns out to be a toy named Buzz Lightyear. Lenny, just like the rest of the toys, takes an immediate liking towards him. One afternoon, when the toys hear Sid in his backyard, Buzz uses Lenny to watch him and his dog Scud mess around with one of his army toys. Lenny warns the toys when he sees Sid light up the fuse on the Combat Carl toy just before it explodes. On that same night, Woody accidentally knocks Buzz out the window. While most of the toys believe that Woody did this intentionally, Lenny is one of the few that do not accuse him of doing this on purpose. However, he loses his trust in him when he sees Woody holding Buzz's broken arm when Woody is trapped in Sid's house.

Andy's family soon moves out of their house and the toys are placed inside a moving truck. When Woody attempts to save Buzz with RC Car, Lenny attacks him, along with all the others, thinking that Woody was trying to "murder" RC by kicking him out of the moving van. The toys then proceed in tossing Woody out the back of the truck as well. While the other toys celebrate, Lenny alerts the toys that he sees Woody riding on RC with Buzz and approaching the truck. Bo Peep uses him to get a closer look and informs everyone that Woody was telling the truth, making the other toys realize that they made a terrible mistake. Lenny alerts the toys again when RC, Woody, and Buzz approach the truck fast by Sid's rocket taped to Buzz's back, just before Buzz and Woody drop RC back into the moving van. Lenny appears again at the end of the film in Andy's room at the Christmas gift meeting, introducing along with Slinky, Robot, and Troikas before hearing what gifts Andy receives for Christmas.

Lenny appears with a non-speaking role in the sequel. He first appears at the beginning of the film helping Hamm look for Woody's hat. When the Davises have their yard sale, Lenny, along with the rest of the toys panic in fear that they will be sold. After Woody heads down to the yard sale with Buster to help save Wheezy, Woody gets thrown off Buster and gets stuck outside. Buzz uses Lenny to keep watch on Woody during these events at the yard sale until Al McWhiggin of Al's Toy Barn steals Woody, prompting Lenny and the other toys to panic. Lenny appeared again at the end of the film when the toys reunite and listen to Wheezy sing "You've Got a Friend in Me", using Mr. Mike as a karaoke machine.

Lenny makes a brief cameo at the beginning of Toy Story 3, in a collection of home videos taken by Andy's mother. it is unknown what happend to lenny between second & third films.

The real life version of Lenny 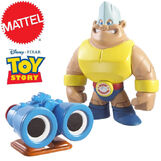 Lenny featured in a Toy Story Buddy Pack with Rocky 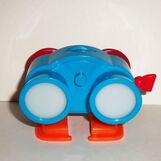