This article is about the character in the Little Einsteins franchise. For other characters with the same name, see Leo (disambiguation).

"We've got a mission!"
"To Rocket!"
"Let the mission... begin!"
"Mission completion!"
"Come on!"
"Pat, Pat, Pat."
Leo (full name Leonardo) is the protagonist of Little Einsteins. At 6 years old, he (as well as June) is the oldest of the group. He is the Little Einsteins' leader and the one who pilots Rocket. He is also Annie's older brother.

His friends are June, Annie, Quincy, and Rocket. He also has other friends, but some are not human (for example, one of his friends is a bumblebee from Africa).

Leo made an appearance as a puppet in Disney Junior - Live on Stage! (back when the Little Einsteins segment was part of the show) located in the Animation Courtyard at Disney's Hollywood Studios.

Also, he made meet-and-greets with people, just like the other Little Einsteins, except Rocket. 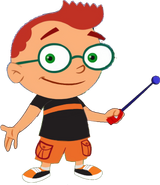 Retrieved from "https://disney.fandom.com/wiki/Leo_(Little_Einsteins)?oldid=4434917"
Community content is available under CC-BY-SA unless otherwise noted.