2005–present
Leo Richard Howard is an American actor, model, and martial artist. Beginning his martial arts training at the age of four and an acting career at the age of seven, Howard is known for incorporating his karate skills into his feature film and television roles; as "Young Snake Eyes" in the 2009 action film, G.I. Joe: The Rise of Cobra, as "Young Conan" in the 2011 fantasy film, Conan the Barbarian and starred as Jack Brewer on the Disney XD comedy series, Kickin' It. He has also had a recurring role, Logan Hunter, on Disney Channel's Shake it Up. He additionally played Troy West in Lab Rats. Then in Fox Kids. He even played Peter Parker/Spider-Man in The Spectacular Spider-Man. In his early Disney fame, he portrayed the title character Leo Little, the host of Leo Little's Big Show. He directed the Gamer's Guide to Pretty Much Everything episode "The Rock Band".

Troy West
(Lab Rats)
Add a photo to this gallery

Leo Howard at premiere of GI Joe: Rise of the Cobra in August 2009 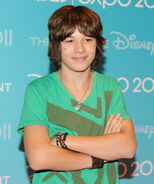 Leo Howard attending the 2015 Radio Disney Music Awards.
Add a photo to this gallery
Retrieved from "https://disney.fandom.com/wiki/Leo_Howard?oldid=4142868"
Community content is available under CC-BY-SA unless otherwise noted.