Fluffy
Leonard Francis Lopart (refered to as Mr. Lopart) is a clumsy character in the animated series, Handy Manny. He owns a candy store. His nickname is Careful Lopart.

Slightly campy owner of a candy store next to Manny's workshop. He is a single middle aged man who lives happily with his cat Fluffy. There hasn't been a reference to him ever being in a romantic relationship, although he does have an excellent loving relationship with his mother. Mr. Lopart's know-it-all unusually high level of self-confidence, attitude, and refusal of Manny's assistance often lands him in trouble, usually resulting in his falling on the floor or on the objects he lifts.

It should be pointed out that Mr. Lopart has accepted help from Abuelito on occasion which suggests the issue he has is actually receiving help from someone his junior. In the episode "Bingo Night", he drops all of the Bingo pieces on the floor and Abuelito offers to lend a hand. Mr. Lopart accepts his offer. Manny and the tools also helped Mr. Lopart in the "A Very Handy Holiday" special and it is probably the first and last time he will do so. His mother is Mrs. Lopart and he has twin nephews named Lyle and Leland Lopart, although it is never mentioned that he has a sibling.

Mr. Lopart is generally simple-minded, self-confident, and funny. But he gets emotional during weddings as seen in Wedding Day when he cried at the wedding causing his mother to worry about him. 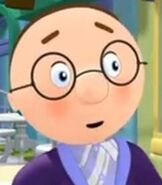 Mr. Lopart as a child
Add a photo to this gallery
Retrieved from "https://disney.fandom.com/wiki/Leonard_Francis_Lopart?oldid=4256888"
Community content is available under CC-BY-SA unless otherwise noted.