Jessie
Leonard Michael Maltin is an American film critic, historian, and author of several mainstream books on cinema, focusing on nostalgic, celebratory narratives. He has appeared in documentaries on the making of classic Disney animated films from late 1930s to late 1970s for the Walt Disney Masterpiece Collection. He also appeared in the Walt Disney Treasures DVD featurettes and was an interviewee in The Age of Believing: The Disney Live-Action Classics. Currently, he hosts Treasures from the Disney Vault on Turner Classic Movies. He is the author of the book The Disney Films. 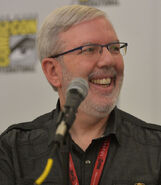