Adam Nimoy
Julie Nimoy
Leonard Simon Nimoy was an American actor, film director, poet, singer-songwriter, and photographer who was best known for his role as Spock in the Star Trek franchise.

He had done some voice work for Disney as well as directing the ride films for the Epcot attraction Body Wars and voiced Xehanort, the series' leading villain, in Kingdom Hearts Birth by Sleep, and Kingdom Hearts 3D: Dream Drop Distance. He also voiced Kashekim Nedakh in Disney's 2001 animated feature film, Atlantis: The Lost Empire. Nimoy was interviewed by Dr. Julius Strangepork for the Summer 1984 issue of Muppet Magazine, and he made a cameo appearance in "Garth Brooks" of Muppets Tonight. 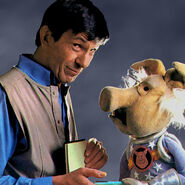 Nimoy as his iconic role Spock from Star Trek

Leonard Nimoy behind the scenes of Atlantis: The Lost Empire.
Add a photo to this gallery

Retrieved from "https://disney.fandom.com/wiki/Leonard_Nimoy?oldid=4210300"
Community content is available under CC-BY-SA unless otherwise noted.