Les Mystères du Nautilus (The Mysteries of the Nautilus) is an attraction at Disneyland Paris based on the movie 20,000 Leagues Under the Sea, which in turn is based on the book of the same name by Jules Verne. It opened on July 4, 1994.

It is a walkthrough attraction located in Discoveryland that lets guests explore Captain Nemo's submarine and witness the Giant Squid attacking the Nautilus from the Salon.

The attraction is actually a reimagined version of the former 20,000 Leagues Under the Sea walk-through attraction at Disneyland.

Captain Nemo's face in the organ. 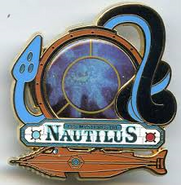 Retrieved from "https://disney.fandom.com/wiki/Les_Myst%C3%A8res_du_Nautilus?oldid=3651547"
Community content is available under CC-BY-SA unless otherwise noted.