“We rule Terabithia, and nothing crushes us!”
―Leslie Burke

Leslie Burke is the deuteragonist of 2007 drama-fantasy film, Bridge to Terabithia. She is Jess Aarons' best friend and possible love interest.

Leslie was mainly Jess' polar opposite. She was talkative, openly social, cheerful and more open-minded about the world around her and while Jess is poor, she was rich. At the beginning of the movie and book, she was the new girl who dresses different, talks different, and does not play by the same social rules as the other kids do. She beat Jess in a racing event he trained for all summer, but she still tried to compliment him and offered him friendship, but was brushed off. After telling the class she has no television and being laughed at, she tried to sit in the back and he grabs her not a second sooner and starts their initial friendship. Running into the woods, they swing across the creek on a rope and start a world of their own. He seems to have some trouble accepting the fact she has different beliefs than him such as his God-fearing Christianity and her agnostic views. After he leaves her behind at home she attempts to go to Terabithia, but the rope breaks and she falls, hits her head on a rock, gets unconscious and drowns. She leaves him angry, heartbroken and feeling it was his fault she died, thinking if he had invited her or turned Miss Edmunds down, she would not have died.

Leslie recently moved to Lark Creek with her parents, Bill and Judy. She is a tomboyish, smart, talented, and outgoing girl. Her talents include creativity and running. She can run faster than any of the boys in her class. She was not socially accepted by the other students in her new school. She and Jess are outcasts there. He thought highly of her, and was best friends with her (and, possibly, first love). He gives her a puppy for Christmas whom she calls Prince Terrien or P.T. for short.

Jess has a crush on his music teacher, Miss Edmunds, and would do anything to be with her. The central crisis occurs when he accompanies her to the National Gallery of Art in Washington, D.C., and Leslie goes to Terabithia alone (not seen).

While Jess is away at the museum, Leslie tries to swing across the creek on the rope to Terabithia. As she is doing so, it breaks (as he warned her it would) and she falls, hits her head on a rock, gets unconscious, and drowns. This deeply shocks Jess, who considered her death his fault, as he had considered inviting her to go to the museum with him and had decided against it so he could be alone with Miss Edmunds. It was then that she tried to get to Terabithia alone, ultimately the cause of her death. He can overcome his grief only with the strength and courage that his friendship with her has given him. He must trust in what she has taught him to help overcome the horrors that reality can bring, and with their friendship, it helps him to cope with the tragedy. Their friendship makes him realize what she has also taught him, to open his mind to every possibility, and leave reality behind.

Jess attempts to deal with his grief by going back to Terabithia, and making a memorial for Leslie. He worries that she will not enter Heaven because she does not believe in Jesus and that God will damn her to Hell. He hears a cry for help, and finds his younger sister, May Belle, calling for help. She was trying to get to Terabithia by climbing on a tree bridge over the creek, but got stuck in the middle. He helps her out. She wants to go to Terabithia, but he snaps at her and tells her it only belongs to him and Leslie.

When Jess' father, Jack, follows him into the forest, he begins to cry, and Jack hugs him. He expresses his worry about her through his sobs, with Jack comforting him.

Bill and Judy decide to move back to their old town. Before they leave, Jess gives them Prince Terrien and Bill tells him that Leslie loved him and that he meant the world to her. 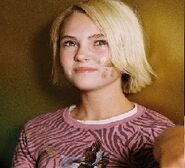 When May Belle teases Jess and Leslie for kissing in a tree, Leslie stops her! 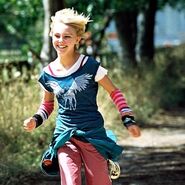 Leslie running to Terabithia!
Add a photo to this gallery
Retrieved from "https://disney.fandom.com/wiki/Leslie_Burke?oldid=4441289"
Community content is available under CC-BY-SA unless otherwise noted.