Iris Apatow
Maude Apatow
Leslie Jean Mann is an American actress who is best known for her roles in comedic films, many of which are collaborations with her husband Judd Apatow. She also voiced Linda Gunderson in the Blue Sky's Rio films.

For Disney, she portrayed Ursula Stanhope in the 1997 family comedy film George of the Jungle. She also voiced Amphitrite in the Hercules episodes, "Hercules and the Son of Poseidon" and "Hercules and the Poseidon's Cup Adventure", and played Biminy in Beverly Hills Chihuahua. 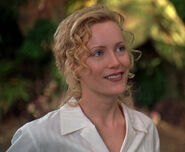 Ursula Stanhope
(George of the Jungle)

Amphitrite
(Hercules: The Animated Series)
Add a photo to this gallery

Leslie Mann attending the 23rd annual Critics' Choice Awards in January 2018.
Add a photo to this gallery
Retrieved from "https://disney.fandom.com/wiki/Leslie_Mann?oldid=3734583"
Community content is available under CC-BY-SA unless otherwise noted.