Let's Go to Disneyland Paris is a Disney's Sing-Along Songs home video released in France in 1993, Japan in 1994, and the UK, Australia, and other English-speaking countries outside of the US in 1996. It is similar on the 1990 video Disneyland Fun, except, as suggested by the title, it was filmed at Disneyland Paris.

Although it was not formally released in the United States, it can be viewed (with the French audio) on the Disneyland Fun DVD if the viewer selects the French language track on the set-up menu.

Songs are for sharing, and learning the words to your favourite Disney songs has never been so much fun! Just sing along to the on-screen lyrics as you enjoy classic Disney characters in their most memorable musical scenes!

Celebrate a musical day at Disneyland Paris - the magical place where dreams come true! See Mickey and Minnie hustle and bustle behind the scenes during a day of fun and thrills at the park! Then get a front row seat on some of the wildest rides, like Star Tours, Big Thunder Mountain and the Pirates of the Caribbean. Join Chip and Dale, Roger Rabbit and a Magic Kingdom full of your favourite Disney characters and sing along to the happiest songs on earth!

The program has been released in several languages.

Most countries released the program once using the "Euro Disneyland" name. There are 4 ways to tell if the program had been changed.

As the video features completely different footage from what was filmed in the original video, there are some noticeable differences. 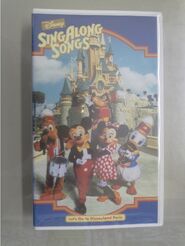