Being ridiculed of his genius, Alex in danger

Lexington (sometimes called Lex for short) is a character in the Disney animated television series Gargoyles. He is one of the Trio (the other two being Brooklyn and Broadway), as well as a member of the Manhattan Clan and a survivor from the Wyvern Clan.

Lexington is into technology and dreams of becoming a scientist. He became the clan's technical expert, taking leadership in accessing data from computers and so on whenever the clan needed help with such things. He, along with Brooklyn & Broadway is highly reminiscent of The Three Stooges.

Lexington likes investigating the many devices of the modern world. He drove Vinnie's motorcycle (with some disastrous consequences). He also learned how to build his own, constructing a motorcycle for Brooklyn out of spare parts and rebuilding the Pack's helicopter to make it more effective.

Aside from being a genius, Lexington developed a great hatred of the Pack after they hunted him and Goliath (after Lex had only wanted to make friends outside the clan).

Lexington is the smallest and, presumably, the youngest gargoyle of the clan. He has olive-colored skin, a hairless head, and pierced wings that allow him to wear a dark blue loincloth held up by a black belt. His most distinguishing feature is his wings, which are attached to his arms in a web-like structure, evocative of the wings of a flying squirrel.

In "Future Tense", Lex was injured and was heavily repaired with cybernetics to replace the parts of his body that were too damaged or missing.

At the start of the show Lexington, along with the rest of his clan, lived in Scotland and protected the kingdom of Avalon.

One night after saving the kingdom. He and three other Gargoyles were unfairly harassed by a paranoid mother in the courtyard, and despite their efforts to appease, they are forced to frighten their harassers to defend themselves. Their leader Goliath subsequently reprimands them for threatening the humans and orders them to remain in their nesting caverns where the clan's eggs are resting.

This saved him and the other three gargoyles' lives when the Vikings came later that day and smashed all the gargoyle statues. When Goliath came back, he informed them what happened and they went after the Vikings.

When he first met Angela, he competed against Broadway and Brooklyn for her affection, Angela chose Broadway, though he didn't take it as hard as Brooklyn did.

In the "Future Tense" world created by Puck, Lexington initially appeared as part of the resistance against Xanatos. It was later revealed, however, that Xanatos had died years before, and Lexington - using the Xanatos Program as a front - had conquered the city and set in motion an unstoppable plan of world conquest. Of course, it turned out to be all a dream created by Puck to get Goliath to hand over the Phoenix Gate so he could bribe Oberon for his freedom from being summoned to the Gathering.

Lexington with Goliath and Broadway in Toon Disney's Magical World of Toons intro. 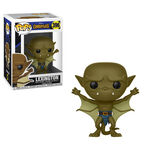