For Disney, he played Qui-Gon Jinn in Star Wars: The Phantom Menace, Charles Mayeaux in Gun Shy, Aslan in the first two Chronicles of Narnia films under the Disney banner (along with its later films outside of Disney), and Fujimoto in the 2008 Studio Ghibli/Disney English dub version of Ponyo. He also portrayed Ben Ryan in Before and After, Leo in the 1988 Touchstone Pictures film, The Good Mother, and as "Priest" Vallon in Scorsese's 2002 epic historical crime film, Gangs of New York. He even voiced Qui-Gon's Force Ghost in Star Wars: Attack of the Clones, Star Wars: The Clone Wars, and in Star Wars: The Rise of Skywalker. 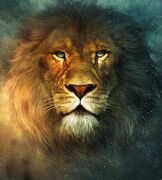 Aslan
(The Lion, the Witch and the Wardrobe and Prince Caspian) 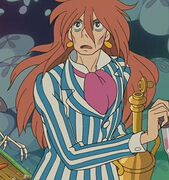