Get Joe to have a successful career and bright future

Joe not having a bright future, her husband's death, her son upset

Libba Gardner is a major character in Disney/Pixar's 2020 animated feature film, Soul. She is the mother of Joe Gardner and a tailor who resides in New York City.

Libba Gardner is Joe’s mother, his biggest fan, and his kind-hearted truth-teller. She is a proud businesswoman who’s owned a successful tailor shop in Queens for decades. Her late husband, Joe’s father, was a struggling musician, so Libba was the primary breadwinner for the family. She knows that life as a musician can be brutal, so she encourages Joe to have a backup plan, which he interprets as a lack of support. But no matter how pragmatic Libba can be, above all, she loves Joe and wants him to be happy.

Libba Gardner is a standard mom, loving but no-nonsense. She conveys the second part mostly to her son Joe. She struggles to understand why Joe wants to get a career as a musician instead of getting a more well-paying job like her at the Tailor Shop. But that becomes the least of her worries when Joe gets into an accident and is laid up in the hospital and when he recovers, he begins to act like a different person. 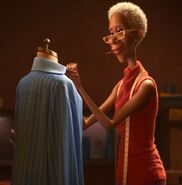 Retrieved from "https://disney.fandom.com/wiki/Libba_Gardner?oldid=4378285"
Community content is available under CC-BY-SA unless otherwise noted.