The Northuldra (formerly), being trapped in the forest, danger

General Mattias (previously dubbed Lieutenant Mattias) is a supporting character in Disney's 2019 animated feature film, Frozen II. He was King Runeard's lieutenant and Prince Agnarr's official guard. Mattias's sworn duty is to protect Arendelle at all costs—an oath that would lead to his imprisonment of thirty-four years in the Enchanted Forest.

Destin Mattias was raised in Arendelle by his father, whom Destin remembers fondly as a great man that taught him to never take the good for granted in life. Eventually, Destin made his way into the royal family as the official guard of Prince Agnarr, during the reign of King Runeard. He was one of the most respected members of the guard, with a portrait hanging within the library of Arendelle Castle, second on the left of Runeard. Socially, he seemed to be romantically involved with a woman named Halima.

Mattias was present during the supposed peace gathering between Arendelle and the Northuldra. Unbeknownst to Mattias, this was a trap set by Runeard, who sought to eliminate the Northuldra. A war broke out between the two sides, which angered the spirits of the Enchanted Forest. Runeard was killed in battle, prompting the spirits to seal off the forest from the rest of the world, trapping Mattias, his surviving men, and the Northuldra inside, and preventing outsiders from entering.

In the thirty-four years following the great battle, Mattias was under the belief that the Northuldra were the instigators, who betrayed the goodwill of the Arendellians. He was nevertheless forced to live among the Northuldra’s land to survive, where he often butted heads with their leader, Yelana.

Lieutenant Mattias's voice actor, Sterling K. Brown, stated regarding the presence of the character in Frozen II that "I love that there's a character of color in this world of Arendelle. I think for such a long time black folks have had to wonder, 'what would it be like to have someone like me in this show, what would it be like to be Superman or Batman.' And then you get 'Black Panther.' Now, we have this character, Lieutenant Mattias, who I get the chance to vocalize, and I have a little action figure and Legos, and I'm like, 'Ah, it's really happening.'" He also described the recording process, stating "You'll go in and record for four or five hours, and then you'll have a month break, and then you'll go in and record again, and they're constantly changing the script."[3]

Judging by how he presents himself, Lieutenant Mattias is a kind-hearted, loyal, open-minded as well as a faithful man. He is a man full of integrity as he upholds the values his late father taught him as well as the values of his kingdom. He is loyal in protecting his kingdom, despite being unaware of King Runeard's deception which led to the conflict.

Mattias is also caring for other people as he understands the plight of others. Prior to being trapped in the Enchanted Forest, he also acts as an actual father figure to Prince Agnarr, to whom he was assigned by the xenophobic king in order to keep his son occupied. Because of this, he cares for Agnarr deeply, especially when he learns the tragic fate that befell Agnarr, which allowed him to see his son-like figure in the two sisters. Thanks to him upholding his values, he was the first Arendellian to reject Runeard's twisted legacy after Anna told him the truth.

Ultimately, Mattias had defined Agnarr in terms of his values and goodwill when it came to ruling Arendelle alongside Queen Iduna. This trait would be mostly shared by the two sisters, especially Anna. It was what gave Anna the strength to lead her kingdom as queen after resolving the conflict.

Mattias is also shown to have a comedically emotional side as shown while listening to Olaf recount the events of the first film, he is genuinely sad about some of the most emotionally impactful moments, albeit in a funny way.

“Soldiers, we may be getting old in years, but we're still strong. And proud to serve Arendelle.”
―Lieutenant Mattias[src]

When Elsa and Anna arrive in the Enchanted Forest, they are confronted by Mattias and his men, as well as the Northuldra. Before the opposing sides can attack the sisters, Elsa puts a stop to them with her powers. Mattias is shocked by this revelation, even asking Yelana if she saw what Elsa did. Olaf introduces the group and explains how they came about the Enchanted Forest, in which Mattias shows deep interest. Through Olaf’s story, Mattias learns that Elsa is the queen of Arendelle, having succeeded the late King Agnarr. Though saddened by the death of Agnarr, Mattias and his men devote themselves to their new queen. Shortly thereafter, the group is attacked by Bruni, the fire spirit, though Elsa is able to tame him.

Mattias and the Northuldra then learn that Elsa and Anna’s late mother, Queen Iduna, was Northuldra and rescued Agnarr from the forest on the day the spirits turned against humanity. The sisters are welcomed into the tribe, and the team recoups at the Northuldran encampment. Mattias befriends Anna and shares some information about his backstory, also asking if Halima is still single—Anna confirms that she is. The time of peace is cut short when the encampment is visited by the Earth Giants, forcing Mattias and the others to hide. Once the coast is clear, and Elsa and Anna embark on the next part of their quest, Mattias and his fleet leave that part of the forest.

Later on, Anna calls on the Earth Giants to destroy the dam that is draining the magic of the Enchanted Forest. Noticing this from a distance, Mattias tries to stop her as he knows that destroying the dam will flood Arendelle. Anna explains that King Runeard was the true culprit behind the war, having betrayed the Northuldra. She proves this by revealing that Elsa may have lost her life for this information. With the truth revealed, Mattias rallies his men to bang their swords against their shields in order to draw the giants to the dam. Anna uses herself as bait for the giants to toss their boulders to the dam, which successfully destroys the structure. Anna nearly falls along with the collapsing dam but is saved by Mattias and Kristoff.

With the dam destroyed, the curse is lifted upon the Enchanted Forest. Mattias and Yelana express their relief while walking out into the open world together with their arms linked. They all discover that Elsa is alive and that she saved Arendelle from destruction. Afterward, Mattias returns to Arendelle with Anna, Olaf, Kristoff, and Sven, where he is promoted from Lieutenant to General by a newly-crowned Queen Anna. He also reunites with Halima, who introduces Mattias to a new "crazy magic" called a photograph. Mattias joins Anna in unveiling a new statue of young Agnarr and Iduna that honors their memory and the new unity between Arendelle and the Northuldra. When Gale, the wind spirit, stops by to look at the statue itself, Mattias watches as Anna asks Gale to deliver a message from her to Elsa back in the Enchanted Forest, to which Gale happily obliges.

Mattias' portrait next to that of King Runeard in the library

Mattias, after Anna explains why the dam must fall, agrees to help her

Mattias learning Arendelle was saved from the flood. 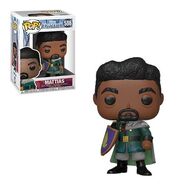 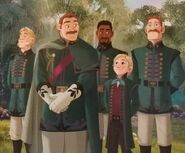